'Breaking the Monologue of Power'

The International Press Institute (IPI) is today publishing the speech given by Salvadorian journalist Carlos Dada, founder of El Faro, as he accepted the World Press Freedom Hero award at IPI’s World Congress 2022 at Columbia University in New York on 9 September 2022.

I’m especially grateful, and I believe I speak for all my colleagues in Mexico and Central America, for the statement you made public today expressing your concerns about the situation for journalists in the region. International and public support are a key protection for us.

It is very special for me to share this award with the late Shireen Abu Akleh, a reporter from my generation, with a solid career of excellence that spanned for decades. She was killed by an Israeli soldier in the Jenin Refugee Camp, and later her funeral was interrupted by a raid against the mourners ordered and executed by Israeli authorities. Her death remains unpunished. To her family: my solidarity and support.

Shireen is a true martyr of journalism waiting for justice.

Journalism is one of the riskiest professions. But we can’t just talk about risk in journalism as if we were talking about racing cars or climbing Mount Everest. No.

Shireen’s death was not an accident, and neither were the killings of Jamal Khashoggi, of Javier Valdez, of Daphne Caruana, of Angel Gahona, of Miroslava Breach, of Dom Phillips, of the more than two thousand journalists killed since 1992. Every one of them paid the ultimate price for informing other human beings, for speaking truth to power, for denouncing corruption, for walking into organized crime territory or investigating injustices against underprivileged people, crimes against the environment, against humanity. Most of those deaths remain unpunished.

I come from Latin America, where around 40 percent of those deaths have taken place. In Mexico alone, a journalist is killed every fifteen days. And now, after a mere three decades of erratic democratic life, authoritarianism is back in Central America and, with it, attacks on the press. Authoritarian populists love monologues and can’t stand alternative versions of their narrative. They can’t allow the truth to surface.

I am the third Central American to receive this award. The first, Pedro Joaquin Chamorro, was murdered half a century ago by the Somoza dictatorship in Nicaragua. The second is José Rubén Zamora, the brave founder of Guatemala´s El Periodico who was arrested a few weeks ago, accused of money laundering. He remains in prison as I speak, and I join those who strongly demand his freedom.

It seems to be the fate of heroes in journalism: to be killed, imprisoned or exiled.

I am not a hero. I don’t even want to be a hero. In fact, I don’t know any journalist who wants to be one. We should work without threats, without surveillance, without harassment. Without fatal consequences. We shouldn’t be mourning colleagues, denouncing unjust imprisonments, or leaving behind our roots. We need to point to those responsible and demand that they be punished. No journalist should be forced to make heroic decisions to do the job. And still, the pressure increases every day.

In Nicaragua, the Ortega regime has closed 54 news outlets, imprisoned 11 media workers and forced into exile almost 200 journalists and editors, many of them accused of money laundering. In Guatemala, besides Jose Ruben Zamora, a dozen reporters and editors have also been accused or imprisoned. Others have chosen exile to avoid it.

In my country, El Salvador, President Nayib Bukele controls the executive and the legislative branches, and through a coup he now also controls the Supreme Court, all the tribunals of the country and the Attorney General’s office. He has made the army and the police his personal guards. Just in the last four months, he has incarcerated more than 50 thousand people without a detention order, accusing them, without proof, of links with gangs.

He declared war on his critics and has been very successful silencing most of those voices, but journalism remains a big obstacle to their strategic monologue.

So it was not surprising when, in an address to the nation broadcasted by all TV stations, he showed my picture and accused me of money laundering. He has publicly led defamation campaigns against many other colleagues and some have already opted for exile or a career change.

Last year, with the expertise of the organizations Access Now and Citizen Lab, we found that the phones of 22 members of El Faro had been infected with the Israeli software Pegasus. The operators tapped my smartphone for 167 days. They activated at will my camera, microphone, and geolocation. They had access to all my chats, videos, and photos. They operated almost a whole year inside the phone of Carlos Martinez, a colleague at El Faro.

Beside the personal burden of knowing that people who mean harm to us have the pictures and addresses of our dear ones, it also had tremendous professional consequences. As soon as we made it public, we lost a significant amount of sources. Nobody wanted to talk to us anymore, for fear of suffering retaliations from a government that controls all the institutions.

The regime has followed us physically, threatened us in various ways, and sent drones to our homes, one of them even entering my apartment through the window. We have six ongoing investigations against us, four of them related to tax and money laundering and at least two criminal investigations. Congress has passed laws that criminalize journalism and preview sentences of 15 years for any journalist or publisher that quotes gang members or publishes gang symbols.

In the 25 years that El Faro has been publishing, we have never faced such threats. And I’m certain that this situation will only worsen, since we keep reporting and investigating. In a way, they have been successful, by making us a story and pushing us to invest many resources in defending ourselves, thus depriving us of some capacity to investigate them. We are aware of that.

The world we want to be part of needs an independent press that speaks truth to power and puts its methods at the service of truth and better understanding why we live the way we live, as societies and countries.

But it is more and more difficult to renovate our faith in journalism. It is a very frustrating practice. We want things to change for better, with the speed and high impact of the Watergate scandal, but that seldom happens. Yesterday, in this same conference, Dmitry Muratov declared the death of independent journalism in Russia. His country is worse now than when Novaya Gazeta started publishing. We are not far away.

El Faro was the first Salvadoran media outlet born in democracy. Now democracy is almost completely gone, and yet, thanks to an innovative, modern and greased propaganda machine, Mr. Bukele is the Latin American President with the highest popular support, which raises a paradox: The communities we serve don’t support us.

This may sound too self complacent, but I believe that in many places, as bad as things are, they would be worse if it weren’t for the work of good journalists.

And second: Why do we do what we do?

This is a serious question to ask in the middle of the crisis a lot of our colleagues are going through all around the world. But we need to defend our reasons for doing journalism, and that means each one of us needs to look deep inside and around, and find those reasons. We all have the right to decide not to do journalism anymore, since the price for doing it is getting higher. It may actually be the sane, healthy decision to make.

But if you decide to go on, you must know that silence is not an option. Our word is our power, our contribution to our communities, and our fate. And we must use our word to break the monologues of power. We cannot renounce the search for truth, through a method of verification and the use of language to communicate our findings and stimulate public debate. We must use our words against silence. We must use our words to defend the truth.

Again, thank you very much for this tremendous honour, which I accept on behalf of all my colleagues in Central America, who are everyday on the verge of heroism as they keep practicing journalism.

On their behalf, thank you for your support. 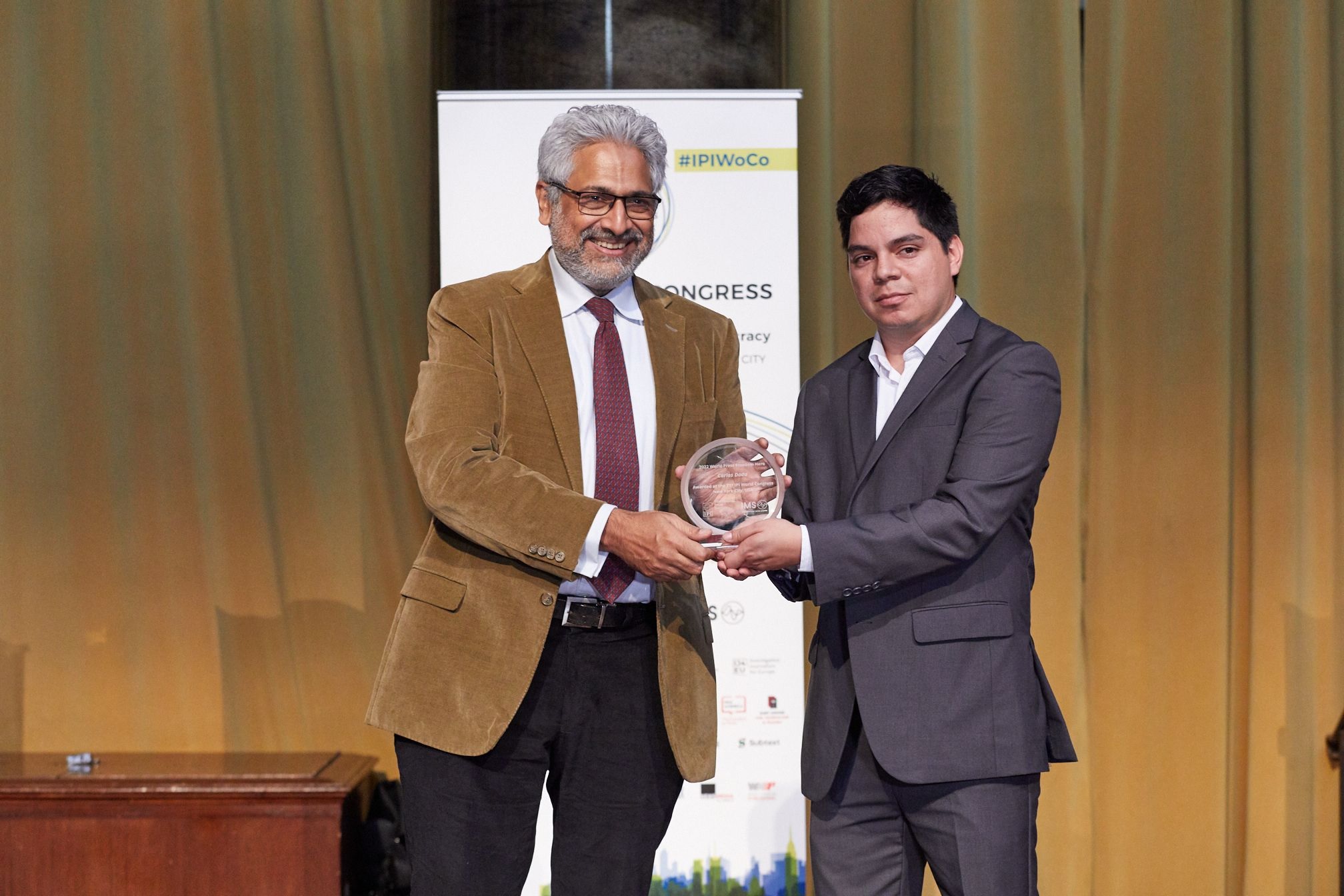 The award was accepted on his behalf in New York by journalist Nelson Rauda. Photo credit: Jasmina Tomic

The World Press Freedom Hero award honours journalists who have made significant contributions to promote press freedom, particularly in the face of great personal risk. Launched by the International Press Institute (IPI) in 2000, the award is now given in partnership with International Media Support (IMS).

“Silence is not an option. Our word is our power, our contribution to our communities, and our fate. And we must use our word to break the monologues of power.”

Part 3: In Manaus, a new digital voice tells the real stories of Amazonians

Venezuela’s Trunk Road 10 becomes BR-174 when it crosses the border with Brazil, in the …
Read More

It’s a photo that tells clashing stories: on its surface, the idyll of a water-side chil…
Read More