The International Press Institute (IPI) vehemently condemned the Egyptian government’s arrest yesterday of Mada Masr editor-in-chief Lina Attalah and urged the international community to press for an end to the harassment and intimidation of journalists in Egypt.

According to information gathered by IPI, Attalah was arrested by the Egyptian authorities while she was interviewing Laila Soueif, the mother of jailed human rights activist Alaa Abdel Fattah, who has been on hunger strike for the past month protesting against a ban on family visits in prison.

Attalah was interviewing Soueif outside the prison when authorities intervened and stopped the interview. After asking Attalah to show her identity card, the prison guards called her inside for questioning. She was then taken to the Maadi district police station and detained there for several hours without access to her lawyer. Later, she was shifted to the office of the prosecutor in the same district and charged with “filming a military facility without obtaining a license from the competent authorities”. She was released on bail of 2,000 Egyptian Lira (around 120 euros). Although the bail amount was paid immediately, she was not released for another two hours.

Mada Masr, a widely respected independent news portal that received the IPI-IMS 2019 Free Media Pioneer Award, and Attalah have been repeatedly targeted by the Egyptian government. In November last year, police raided the Mada Masr’s office and briefly detained members of its staff. Security officials searched the office, confiscated mobile phones, computers and other equipment and took Attalah and two others into custody. All those present in the office were asked for unlock their phones and computers, while being confined to the newsroom. Attalah and her colleagues were taken to Dokki police station, handcuffed to one another and driven around in a police truck until they were released later that evening.

More than 61 journalists are in prison across Egypt. President Abdel Fattah al-Sisi has turned a deaf ear to demands for their release. Soon after the raid on Mada Masr, U.S. Secretary of State Mike Pompeo called on Egypt to respect press freedom.

Last week, two journalists were arrested on the charges of belonging to and financing a “terrorist group” and spreading “fake news” that threatens national security. 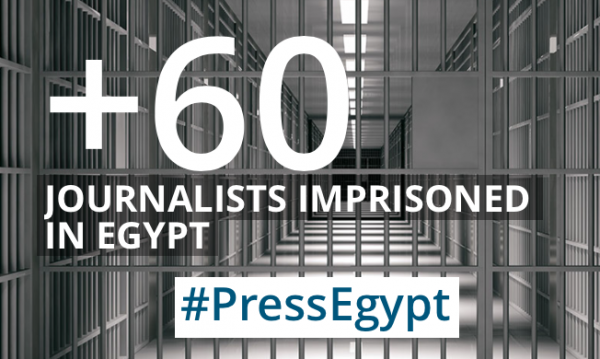