A UNICEF worker shares information on Ebola and best practices to help prevent its spread with residents of the Matam neighborhood of Conakry, Guinea in this handout photo courtesy of UNICEF taken August 20, 2014. REUTERS/Timothy La Rose/UNICEF/Handout via Reuters

A recently released report by the Media Foundation for West Africa (MFWA), “Ebola and Freedom of Expression in West Africa”, covers an overlooked challenge of the Ebola outbreak: the dissemination of accurate and fair information about the disease through the media.

As the report notes: “[T]he nature of the disease itself imposes massive restrictions on journalists’ capacity to effectively report on the outbreak, as journalists also risk contracting the disease…. The dangers of reporting on Ebola have exacerbated the already weak media sectors and economies of the worst-affected countries: Guinea, Liberia and Sierra Leone. There has also been an upsurge in general intolerance towards the media in the affected countries, including attacks on and arrests and detentions of journalists, closures of media houses and increased levels of official and unofficial censorship among the media.”

Social media has helped to fill the dearth in critical reporting by raising awareness. However, sites like Twitter and Facebook have also been the conduit for false information about how the disease is transmitted or can be prevented.

Additionally, all three of the worst-affected countries suffer from poor infrastructure as a result of recent conflict and political upheaval, which also has prevented many journalists from accessing specialised training.

The report highlights the importance of a free media in realizing the right to health guaranteed under the International Covenant on Economic, Social and Cultural  Rights (ICESCR). MFWA argues that restricting information about the outbreak though a clampdown on freedoms of expression could exacerbate the epidemic and be harmful to West Africans.

IPI spoke with MFWA Program Officer for Free Expression Rights Monitoring and Campaigns Anjali Manivannan about the report and its findings.

IPI: What can journalists do to combat the spread of the Ebola virus?

Manivannan: Journalists can raise awareness about Ebola symptoms and educate people on how to prevent infection as well as what to do and where to go if someone in the community exhibits symptoms. Along these lines, journalists can combat the spread of misinformation – for example, dangerous rumours that health workers and hospitals actually spread Ebola – and encourage people to seek medical treatment if they are experiencing symptoms.

IPI: In the report you mentioned the positive impact that community-based radio can have. Can you say a little more about how community radio has helped, especially when it comes to engaging community and religious leaders?

Manivannan: Trust is key in spreading timely, accurate information about any subject. In the worst-affected countries, which are recovering from armed conflicts or authoritarianism, trust in government authorities is weak. So engaging trusted community, traditional and religious leaders who then talk about the Ebola disease, symptoms and prevention, and containment methods may be more effective than involving state officials.

Community leaders may also be better suited to spreading knowledge without disrespecting local traditions. For instance, people should understand why certain customs, such as burial practices that involve touching the body, increase the spread of Ebola. But if news reports decry practices as backwards, they do not foster trust among the community. Positively, the WHO has engaged with community leaders to raise awareness about Ebola in a manner that is sensitive to local customs.

The staff of community-based radio stations are often community members, so people usually already know and trust them. The trust placed in community-based radio has also prompted people to report suspected cases of Ebola to the radio stations, which can then pass along information to health workers. This has reduced Ebola denial in vulnerable and underserved rural communities that may be at higher risk for Ebola contamination.

IPI: What could happen if reporters relied on information from the government or doctors, instead of conducting their own investigations into the outbreak?

Manivannan: The media’s watchdog role in holding governments and other actors accountable is severely compromised when the media cannot conduct independent and impartial investigations. Information provided by the government may be sanitised in order to hide issues related to corruption or government mishandling of the outbreak, for example. As part of their investigations, journalists should get information from officials and doctors, but in order to do critical reporting and assess the impact of the outbreak, it is important that journalists have access to patients, international institutions, and civil society actors, among others. Restricting journalists’ sources may create the perception of bias and cause the public to mistrust the media and its reports on Ebola. This would negatively affect media efforts to prevent and contain the spread of the disease.

IPI: Liberia has experienced a particularly harsh crackdown in the media sector. Can you say a little about the situation there? What was the media landscape like in the past? How could the current media situation in Liberia be harmful in terms of the Ebola outbreak?

Manivannan: Liberia is one of the poorest countries in the world and this, coupled with years of civil war, has caused reporting and general education to suffer. Even before the Ebola outbreak, the media landscape in Liberia was marred by a lack of critical reporting as well as by government repression of critical reporting. This situation has carried over today and is particularly problematic because professional journalism skills are necessary to conduct investigations, invalidate misinformation, and provide timely, accurate information about Ebola. There have been very few training programs for journalists, especially with respect to reporting on health issues such as Ebola, which underscores the need for capacity-building initiatives concerning the disease.

IPI: After reading the report, it seems quite clear that dissemination of quality information about the Ebola virus, its symptoms, and how to treat it is essential. Why are governments so resistant to journalists doing their jobs?

Manivannan: Generally speaking, governments are concerned about bad publicity and consequently want to prevent the dissemination of reports that may hurt the country’s image and economic conditions. As the media continues to report more and more Ebola cases, people may perceive government efforts as ineffective, thus damaging the country’s image at the national and international level. Ebola has also had a significant impact on the economy in West Africa, and increasing reports about Ebola may deter others from doing business in the affected countries even more.

Take Liberia, for example. Liberia is experiencing something of a freedom of expression crisis at the moment in which the government has attacked journalists who criticise the government, report on corruption, and cover government-perpetrated violence. In fact, Liberia seems to be using the state of emergency as a pretext to silence critical speech. In many ways, these are the usual reasons a government would have in restricting press freedom, but the entire situation is exacerbated by Ebola.

IPI: How has news or media coverage in countries that have not been directly affected helped or hindered understanding about the outbreak?

Manivannan: In Ghana, for example, radio stations have been disseminating information on air and also via Twitter about Ebola symptoms and how to avoid contracting the disease. On the social media front, BloggingGhana, an organization of bloggers in Ghana, has raised awareness via social media and also has a by-subscription text messaging service that provides preventative tips and news about Ebola to subscribers. In different countries, people have also used hashtags like #FactsOnEbola and #EbolaFacts to increase awareness and understanding about Ebola.

I think we should also note that a number of U.S. media outlets have caused panic and increased racism towards West Africans – not just those from the affected countries – which facilitates the spread of fear, hostility, and misinformation. This has escalated dramatically since the United States recorded its first Ebola case and death. 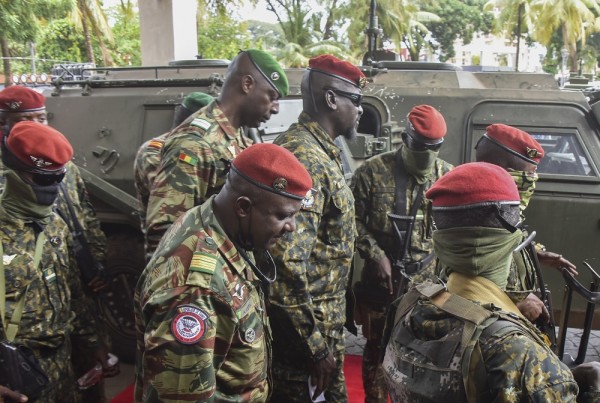 Guinea: One year after coup, transitional authorities must protect press

Between May and August 2022, at least 14 journalists were detained or attacked in Guinea, …
Read More