Report represents milestone in fight for accountability and justice

We the undersigned organisations welcome the conclusions and recommendations of the milestone Public Inquiry into the assassination of Malta’s leading investigative journalist, Daphne Caruana Galizia. Now is the moment for the Maltese authorities to consider and accept the Board’s detailed recommendations and to publish a plan of action on how they will be implemented in a non-partisan manner without delay and ensure better protection of journalists going forward.

On 29 July 2021, the landmark Public Inquiry into the assassination of Daphne Caruana Galizia published its conclusions, finding that “the State has to shoulder responsibility for the assassination because it created an atmosphere of impunity, generated from the highest levels in the heart of the administration of the Office of the Prime Minister and like an octopus spread to other entities like regulatory institutions and the police, leading to the collapse of the rule of law. As a result the State (a) failed to recognise the real and immediate risks, including the criminal intent of third parties towards the life of Daphne Caruana Galizia; and (b) failed to take measures within the scope of his powers which, with reasonable judgment, the State was expected to take to avoid that risk. While the inquiry did not identify proof of direct government involvement in the assassination, it found that state authorities created a “favourable climate” for anyone seeking to eliminate her to do so with the minimum of consequences.”

The Board of Inquiry’s report represents a milestone in the fight for truth, accountability and justice for Caruana Galizia’s assassination and its conclusions and recommendations are of global significance in battling impunity for crimes against journalists.

​​For nearly two years, at every step Joseph Muscat’s administration opposed the establishment of a full independent, impartial and effective public inquiry despite clear international guidance that such an inquiry was required to comply with Articles 2 and 10 of the ECHR. The Public Inquiry ultimately came about only through the threat of legal proceedings and a landmark resolution from the Parliamentary Assembly of the Council of Europe, which was secured through extensive advocacy by Daphne Caruana Galizia’s family and international civil society.

We pay tribute to the courage and tenacity of the members of the Board of Inquiry in the independence, impartiality and professionalism they have demonstrated in producing this report. Since the establishment of the Public Inquiry in December 2019, its work has been subjected to political pressure aimed at hindering its efficacy and independence. Our organisations have closely monitored and participated in the work of the Board of Inquiry, including by providing in-person testimony, observing proceedings and filing a comprehensive submission on the ongoing threats to journalists and press freedom in Malta.

This is an important milestone in the long fight for justice – one which Daphne’s family fought hard for. But its vital that this report is not seen as closure, but as the beginning of a vital process of national reconciliation for #Malta. #JusticeforDaphne @notesfromdaphne pic.twitter.com/ZjkN3xjjmB

The 437-page report, the result of 93 sittings during which the Board of the Public Inquiry heard from 120 witnesses, concludes that all of the evidence heard throughout the inquiry led to a conviction that Caruana Galizia’s assassination was either intrinsically or directly linked to her investigative work, which included allegations of administrative irregularities or abuse in major development projects which involved elements of big business. It finds a “culture of impunity not only for senior officials in the public administration, including ‘persons of trust’ but also for a restricted circle of politicians, businesspeople and criminals.” Caruana Galizia’s highly critical reporting of these political and economic power centres “inevitably resulted in a direct confrontation with those in power” leading to a pressing need to contest the journalist and neutralise the repercussions of her writings which reached a climax following the publication of the Panama Papers and revelations about offshore company 17 Black which continued to escalate until the moment she was assassinated.

The report outlines in detail the sustained “denigrating campaign that demonised Daphne Caruana Galizia in a scenario of impunity” including incidents of verbal abuse, harassment, stalking and attempts to cripple her financially through SLAPPs (Strategic Lawsuits Against Public Participation). Importantly, the Board also recognised the role political propaganda plays in the harassment of the journalist. Crucially, it notes that the risks to Caruana Galizia’s life were obvious to all except those entrusted with her security — the Commissioner of Police, security services and regulatory authorities.

Former Prime Minister Muscat’s entire cabinet was found to be collectively responsible for their inaction in the lead-up to the 2017 assassination. The Board found that not only did the State fail in its duty to protect journalists and the right to freedom of expression, but certain officials actively and directly acted in a way that prejudiced Caruana Galizia’s rights as a journalist and contributed to the risk she faced. While there is no evidence that the State played a role in her assassination, it created an atmosphere of impunity where anyone who wanted to eliminate her could do so with the least possible consequences. It said it cannot but come to the conclusion that there was an “orchestrated plan” to neutralise Daphne’s investigative journalism. The  plan worked because it was organised by the Office of then Prime Minister Joseph Muscat and led to the total isolation of the journalist. It also noted that the person who stands accused of commissioning the crime boasted of his closeness with ministers, the Prime Minister’s then Chief of Staff, Keith Schembri and others. 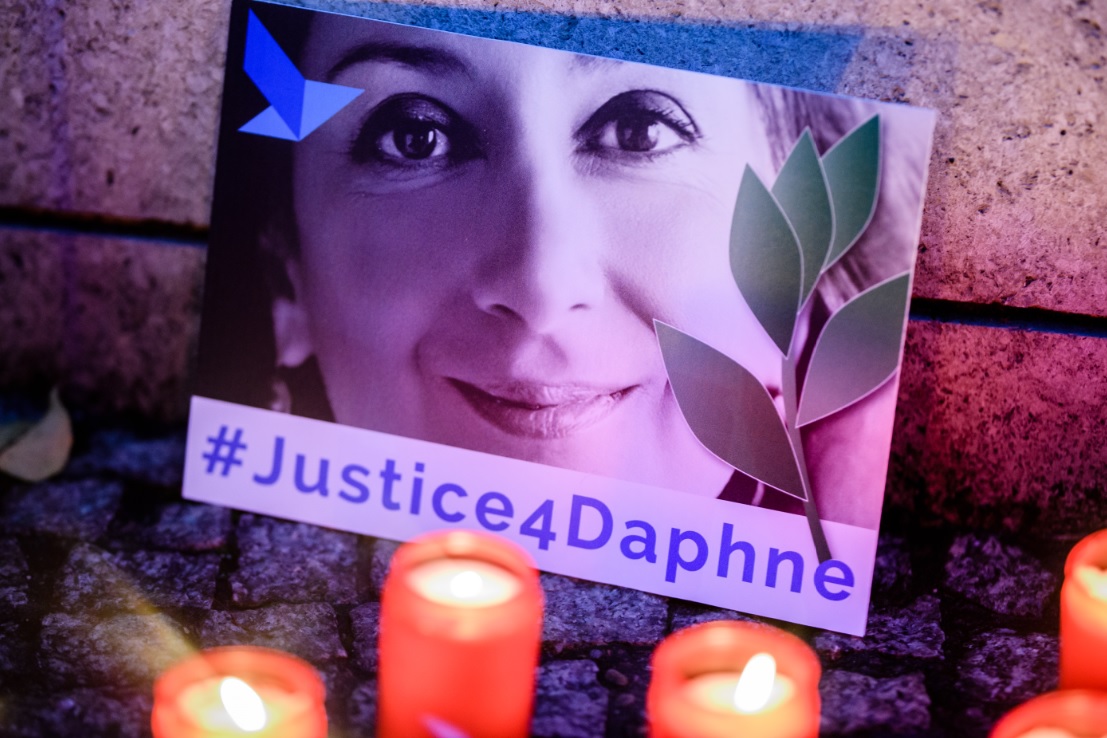 The Board proposes a detailed series of important recommendations which the authorities in Malta must now analyse and implement in a non-partisan manner without delay. These include a series of recommendations on strengthening the rule of law, adopting as its own the recommendations of the Venice Commission, of the GRECO report and the PACE Legal Affairs and Human Rights Committee.

With respect to press freedom and freedom of expression, the Board makes a series of detailed legal and procedural recommendations to strengthen the protection of journalists and the strengthening of journalism and freedom of expression in the country, aimed at remedying the failure of the Police and regulatory authorities to promptly and effectively intervene to investigate allegations by the journalist – steps that had they been taken “would have significantly reduced, if not completely eliminated the elements of illicit or illegal acts that caused the escalation of risk to the life of the assassinated journalist.” Recommendations relating to the Police Corps include specialised police protection of journalists, the need for specialised training for the Police Corps “to have a thorough understanding of the role of the journalist as a guardian of democracy and the value of journalism as a valid collaborator with law enforcement to ensure the rule of law”.

Further recommendations are made for legal reform at the Constitutional level towards the recognition of freedom of expression as a pillar of a democratic society within the Constitution, the creation of an Ombudsman on journalistic ethics and the strengthening of the impartiality of the Public Broadcaster. At the legislative level, the Inquiry recommends the revision of the Freedom of Information Act to strengthen government transparency and compliance with freedom of information requests. To address the problem of SLAPPs the Inquiry recommends the revision of the Media Defamation Act to eliminate the possibility of public officials taking vexatious libel cases and the possibility of taking libel lawsuits against journalists after their deaths, as remains the case for the heirs of Caruana Galizia who continue to face lawsuits including from former Prime Minister Muscat.

The Board goes on to make recommendations to address the allocation of state advertising to the media and the establishment of a Committee of Experts of academics, media law experts, journalists and media house owners to examine in depth the state of journalism and the exercise of the fundamental right to freedom of expression and to implement the recommendations of the Board.

Our organisations will further analyse these detailed conclusions and recommendations and will closely monitor their implementation, with a particular eye to the proactive protection of journalists still working in Malta. It is our hope that the Public Inquiry conclusions and recommendations will lead to full justice and accountability for the assassination of Daphne Caruana Galizia and result in practical reforms in laws and practices that will ensure meaningful protection for the safety of journalists and freedom of expression in Malta and beyond.