Awards to be formally presented at IPI World Congress in September

The late U.S. journalist Daniel Pearl and South African editor Raymond Louw were today named World Press Freedom Heroes by the International Press Institute. The Vienna-based press freedom organization will formally present the awards during a special ceremony at its annual World Congress, to be held between 24-27 September 2011 in Taipei, Taiwan.

Wall Street Journal reporter Daniel Pearl was brutally murdered in Pakistan in 2002 while on the trail of the so-called shoe bomber Richard Reid. Born in 1963, Pearl’s career in journalism began with co-founding a college newspaper. He then progressed to the North Adams Transcript and the Berkshire Eagle in western Massachusetts, then moved on to the San Francisco Business Times.

Pearl joined the Wall Street Journal in 1990, and was appointed its South Asia Bureau Chief in 2000. His established record of investigative journalism included incisive exposes on the war on terror. It was Pearl who uncovered that the U.S. had mistakenly bombed a Sudanese pharmaceutical plant, believing it to be a weapons factory. He also broke the story of Al Qaeda’s money laundering through the Tanzanite gem market. His work included controversial investigations of NATO and UN claims of death tolls in Kosovo, as well as the marginalisation of the Serb minority in Croatia following Operation Storm in 1995.

On 23 January 2002, on his way to what he thought was a meeting with spiritual leader Sheikh Gilani, Pearl was abducted from near a Karachi hotel. An email from his abductors, which included several demands, including the release of Pakistani terror detainees in the United States, also contained this sentence:

“We give you one more day if America will not meet our demands we will kill Daniel. Then this cycle will continue and no American journalist could enter Pakistan.”

Nine days later, Pearl was murdered. On 21 February 2002, a videotape was released which captured the crime on camera.

“I am proud that IPI has chosen Danny as its 61st World Press Freedom Hero,” said Mariane Pearl, Daniel Pearl’s widow. “Quality journalism is defined by an uncompromising will to pursue the truth, to empower citizens and bring justice to all. By shining a light on those values that honour us as a society, those, like Danny, who practice quality journalism will never fail to inspire others. This torch passed on from one such journalist to the other brings the potential of indestructible hope.”

On 19 May 2010, U.S. President Barack Obama enacted the Daniel Pearl Freedom of the Press Act, which protects U.S. journalists around the world, and works to safeguard press freedom.

“Daniel Pearl has left a lasting impression on all concerning the dangers faced by journalists in pursuit of the truth,” said IPI Director Alison Bethel McKenzie. “Our Press Freedom Hero committee overwhelmingly voted for his posthumous recognition this year. We are proud to list him among IPI’s World Press Freedom Heroes.”

He started journalism on the “Mail” – where he was shot at while reporting on riots – and later worked on newspapers in Sussex, Cumbria, and London, England, for six years and on the Sunday Times in Johannesburg.

Between 1966 and 1977, he was editor of the noted  anti-apartheid newspaper, the Rand Daily Mail. During this time he worked alongside Laurence Gandar, who was posthumously named an IPI World Press Freedom Hero in 2010. Under Louw’s editorship, the Mail became known for its pioneering investigative work on apartheid and other issues.

During the apartheid era, Louw headed the Media Defense Trust, set up to defend journalists against censorship.

In the run up to South Africa’s first democratic elections in 1994, while chairman of the Freedom of Expression Institute, he was appointed to the Independent Media Commission to ensure state broadcasting and state-financed publications were impartial.

Raymond Louw is the Chairperson of the South African Press Council, and was one of the founding members of the South African National Editors’ Forum, dedicated to promoting inclusivity and representing the concerns of the media. He is also an IPI Fellow and in 2010, was awarded the Lifetime Commitment to Press Freedom Award at the 2010 IPI World Congress in Vienna.

“Raymond Louw has been a friend of IPI, and of press freedom as a whole, for many decades,” said  Bethel McKenzie. “His commitment to press freedom and his outspoken defence of journalists’ rights, have paved the way for many who followed in his footsteps to do their work without intimidation and harassment. We were proud to declare Raymond Louw an IPI Fellow in 1994, and we are proud now to name him a World Press Freedom Hero for his lifetime of work on press freedom.”

Raymond Louw told IPI yesterday: “I am overwhelmed at this singular honour bestowed on me by the International Press Institute.” “I am greatly humbled when I contemplate what this award means – that my peers have placed me alongside the formidable pantheon of indomitable men and women who have raised journalism through their courage and bravery, professionalism and dedication to the principle of the people’s right to know to a pinnacle of human endeavour. My fight for press freedom was in the way of the soldiering journalist.

“I wish to dedicate this award to the journalists of the Rand Daily Mail when I was editor. In their battle against apartheid and censorship in South Africa many were brutally harassed and a number were jailed. But their work had such telling impact that the government of John Vorster first tried to buy the paper clandestinely through a front man and turn it into a pro-government mouthpiece and when that failed spent R30-million of taxpayers’ money to start a competing pro-government newspaper in an attempt to kill off the Mail. The story of that illegal enterprise which resulted in Vorster’s political demise became known as Muldergate, named after Information Minister Connie Mulder who headed it.

“I see this award as providing immense encouragement to all journalists to continue to fight that battle in the spirit of the IPI and those Mail journalists.” 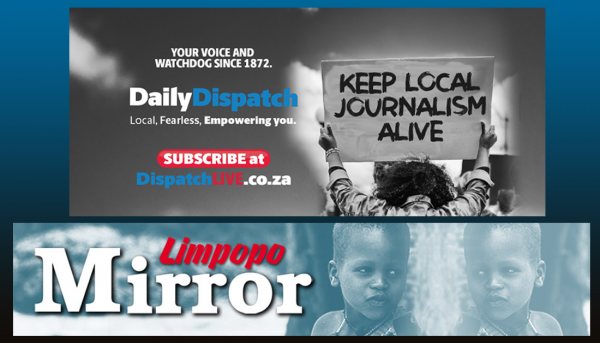 In South Africa, an audience-centred future for proud local journalism