One of Bulgaria’s leading investigative news websites, Bivol.bg, has been hit with an avalanche of repressive government probes, audits and investigations in recent months, in what its owner says is targeted retaliation for its reporting on corruption in the country’s ruling party.

In March 2019, the site revealed a major real estate scandal implicating top officials in the administration of Prime Minister Boyko Borissov, leading to a string of high-level resignations and a wave of anger against the government.

Since then, according to Bivol’s founder, Assen Yordanov, the website and its journalists have been subjected to a “mafia-style” campaign of pressure from government authorities determined to silence its work, including unjustified investigations, defamatory articles and police questioning.

The attacks on Bivol underscore the serious challenges that investigative journalists face operating in Bulgaria, despite the country’s EU membership.

“In recent months, Bivol, myself, my colleagues and my family have been under constant attack”, Yordanov told the International Press Institute (IPI) in a recent interview.

“The reason for the lawlessness that is being exercised against us is entirely the work of Bivol and the investigations we are doing in exposing crime, corruption and abuse of power by the ruling parties.”

In June, Yordanov and Bivol’s editor-in-chief, Atanas Tchobanov, were targeted by a smear campaign in government-aligned newspapers. Soon after, authorities opened a criminal investigation into their real-estate holdings. In August, the prosecutor-general issued a European investigation order against Tchobanov. Since then, the State Inspectorate of Financial Inspections has ordered fresh checks into the finances of both Yordanov and his wife. Similar audits completed six months ago found no irregularities.

“All the investigations against Bivol completed so far have come out clean”, Yordanov said. “The last one lasted six months and found nothing. Nevertheless, another financial check is now being launched.”

“This has led to incredible stress and economic pressure”, he noted, adding that his wife was suffering from depression because of these attacks. “I am currently considering political emigration with my family, because in Bulgaria it is impossible to live and survive in a normal way anymore.”

“These relentless attacks against Bivol and its journalists are being carried out with one goal in mind: to pressure and intimidate a successful investigative media outlet into silence”, Prasad said. “The Bulgarian authorities should immediately halt this coordinated campaign of repression and remember its duties to respect the wider journalistic profession.”

In March 2019, Bivol helped break the news of the ApartmentGate scandal, which revealed how top officials in the ruling GERB party had obtained luxury apartments in the capital Sofia at below-market rates.

Shortly after the scandal broke, a number of top officials began to resign, including Tsvetan Tsvetanov, the deputy leader of the ruling party and second-most-powerful man in Bulgaria.

The stories prompted Bulgaria’s prosecutor general, Sotir Tzatsarov, to launch an investigation. However, in a highly embarrassing revelation, Bivol’s reporting later implicated Tzatsarov himself in the same scheme. Soon after, Yordanov and his colleagues at Bivol became the target of a retaliatory smear campaign by newspapers owned by figures with links to the government. 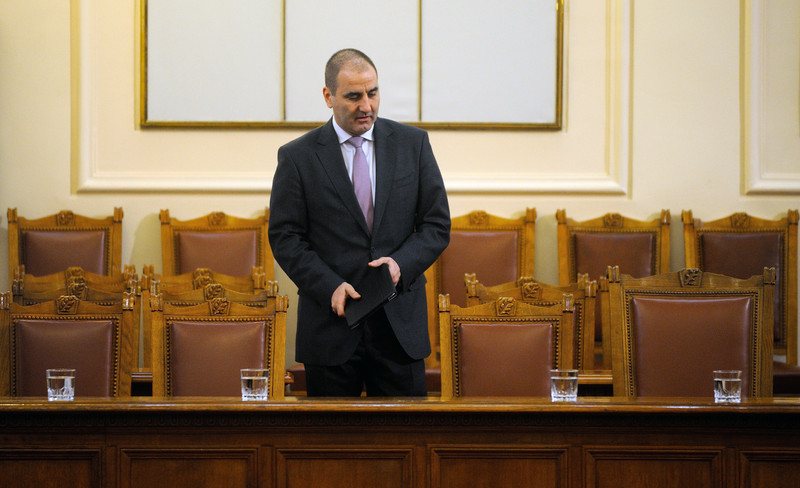 Tsvetan Tsvetanov, a former interior minister, was forced to resign as chairman of the ruling party’s parliamentary group in the wake of the ApartmentGate investigation. EPA/VASSIL DONEV

On June 2, 2019, the newspaper Trud, a pro-government publication owned by the controversial media mogul Delyan Peevski, published an anonymous article that accused Yordanov and Tchobanov of themselves purchasing real estate under market value.

Days later, the two Bivol journalists were told by police that an investigation was being opened into their real estate holdings. The probe was ordered by a body led by Tzatsarov.

The evidence for this inquiry consisted of reports handed to police by an anti-corruption NGO called BOETS that accused both journalists of real estate fraud. Later the organization denied issuing such a report and has made a counter complaint for identity theft.

Following the accusations, Yordanov also published real estate documents that clearly refute the report. Rather than drop the case, authorities continued the investigation for six months, escalating into a series of summons and questioning by police.

In August 2019, the prosecutor-general then issued a European investigation order in an attempt to bring Tchobanov back to Bulgaria from France, where he resides, and question him as a witness in a hacking case.

The police say they want to speak to Tchobanov as part of an investigation into a massive cyberattack in Bulgaria in June. According to reports, the hacker sent several gigabytes of stolen data to Bulgarian news groups, including Bivol.

Police said that while searching through the hacker’s computer devices, investigators found some files had been send to Bivol two weeks before other news agencies. It was claimed that communication between the hacker and Tchobanov had also been found on the Telegram messaging app.

Tchobanov has denied any knowledge of the hacking or speaking to the alleged hackers. He has said that he is willing to appear before the French police for investigation but will not return to Sofia.

However, he and Yordanov fear the EOI may be a method for authorities to access Bivol’s servers, which are located in France.

Bivol is one of Bulgaria’s leading investigative news outlets, whose work also recently included a massive cross-border investigation into the misuse of EU funds in Romania and Bulgaria. That project was supported with a grant from IPI through the IJ4EU fund.