Belarus: One year of media crackdown

Belarusian women wearing clothes and holding umbrellas in colours of a protest flag, march during a protest against the government and Belarusian President Lukashenko in Minsk, Belarus, 19 March 2021. EPA-EFE/STR

This week, on August 18, Belarusian authorities raided the offices of the independent news agency independent BelaPAN and the homes of several of its staff members. The agency’s editor-in-chief, Iryna Leushyna; accountant Katsyaryna Boyeva; and former director Dzmitry Navazhylau were detained under suspicion of violating public order.

As disturbing as these arrests are, they are but the latest in a brutal crackdown on independent media and opposition voices critical of the current Belarusian regime that has now lasted over a year.

On August 9, 2020, the streets of all major Belarusian cities were filled with people protesting election results widely considered to be fraudulent. Authoritarian president Alexander Lukashenko, in power since 1994, responded to the protests with violence and arrests. Lukashenko claimed a landslide victory and a sixth consecutive term in the elections, which have been deemed rigged by the international community and millions of Belarusian citizens.

Over the past year, protests against Lukashenko and his administration have been met with a brutal crackdown on independent media, non-governmental organizations, activists, opposition leaders, and civil society. The result has been arrests, raids, police brutality, legal harassment, forced confessions, torture of political prisoners, and even alleged assassinations.

The IPI global network has repeatedly condemned the raids on news outlets, called on European institutions to adopt new sanctions on Belarus, and demanded the release of all detained journalists. According to the Belarusian Association of Journalists (BAJ), 29 media employees are currently imprisoned. Over the past year, 135 searches have been conducted by the authorities at the homes of journalists and offices of media outlets, access to 100 news websites has been blocked, and 10 publications have been forced to stop their work.

Month of continuous raids and arrests

The past month has witnessed a further acceleration of the repression. According to the Viasna human rights centre, more than 200 raids on offices and apartments of activists and journalists were conducted in July alone. The state’s crackdown on independent media escalated again on July 8 with a police raid on Nasha Niva, one of Belarus’ oldest and most popular news outlets. Nasha Niva’s website was blocked, and several of its employees were arrested. Euroradio, an international radio station promoting democratic values, was closed by the Belarusian authorities on July 5.

Andrej Dyńko, editor-in-chief of Nasha Historyja, a historical magazine published by Nasha Niva; Jahor Marcinovič, Nasha Niva’s editor-in-chief; Andrej Skurko, head of the advertising department; and chief accountant Voĺha Rakovič were arrested following searches of their homes, Nasha Niva’s editorial office, and its accounting office. Rakovič was released on July 16 and Dyńko on July 21, but Marcinovič and Skurko are still detained. Ten days after their arrest, Marcinovič and Skurko were charged with “infliction of property damage without signs of embezzlement by a group of persons”.

In the following days regional news outlets Hantsavicki Chas, Intex-Press, Media-Polesye.by, Mahiliou Region, and Brestskaya Gazeta had their offices searched by KGB officers, several homes of independent reporters were raided, and the website zerkalo.io was blocked.

Mass searches of journalists’ homes and news outlets’ offices continued on July 16. According to the BAJ, the homes of several journalists working with Belsat TV were searched and one of them, Hanna Haliota, was arrested. The Belarusian headquarters of Radio Free Europe/Radio Liberty (RFE/RL) were raided along with the homes of three of their journalists. RFE/RL reporters Inesa Studzinskaja and Alieh Hruzdzilovič were arrested and released 10 days later, but they remain suspects in an unspecified criminal case.

Photojournalist Dzmitry Dzmitryeu from the Novy Chas newspaper was arrested on July 5. According to Belsat TV his legal status is still unknown.

The next escalation of the crackdown on independent media came on July 22, when the Belarusian justice ministry filed a lawsuit seeking the closure of the Belarusian Association of Journalists (BAJ). The ministry alleged that BAJ failed to provide requested documents on time. BAJ said that it was unable to deliver the documents as its headquarters in Minsk had been sealed off since the police raided them on July 14. More than 50 non-governmental organizations, including BAJ, are currently facing closure in Belarus.

On July 27 the Polish-funded Belsat TV was declared “extremist” by a Belarusian court and its website and social media accounts were blocked. Sharing or posting content from Belsat TV now carries a fine or jail time of up to 15 days. Belsat pointed out in a statement on its website that reading their content and subscribing to their social networks was still allowed and not a violation of the law.

The chief editor of the regional news outlet 6tv.by, Barys Vyrvich, was interrogated on July 28 and the website of 6tv.by was forced to close. Photojournalist Dzmitry Dzmitryeu from the Novy Chas newspaper was arrested on July 5. According to Belsat TV his legal status is still unknown.

Zerkalo.io, a news website established by former Tut.by journalists who fled Belarus, is currently facing the same faith as Belsat TV. On August 13 the Ministry of Internal Affairs of Belarus appealed Minsk Central District Court to label all content published by Tut.by and Zerkalo.io “extremist”.

If the decision is passed and the news outlets are added to the “extremist list”, anyone who shares news from the portals or even images with their logos may face punishment. The Zerkalo.io portal said in a statement: “We are confident that we are not violating the laws, and the claims of the Interior Ministry are unfounded. Zerkalo.io journalists follow the principles of journalism and Belarusian laws.”

15 journalists of Tut.by are currently behind bars, including its director, Lyudzmila Chekina, and the editor-in-chief, Maryna Zolatava.

The crackdown on independent media in Belarus has accelerated over the past few months despite Western sanctions. As a response to the sanctions, Lukashenka vowed to send drugs and migrants to Europe. In recent weeks officials in neighbouring Lithuania and Poland have reported a growing number of migrants illegally crossing their borders from Belarus. 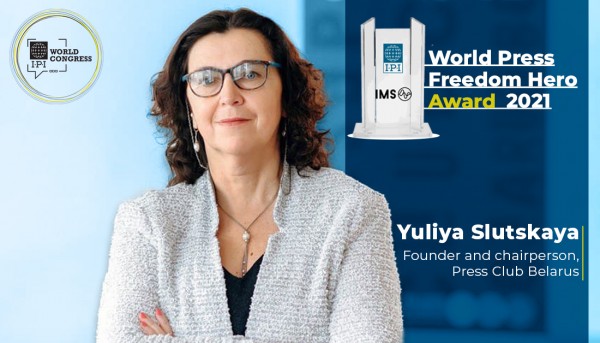 Yuliya Slutskaya, the founder and chairperson of Press Club Belarus and an unswerving beac…
Read More