One of the worst press freedom crackdowns in years, IPI says

Riot police block a road during a protest rally against the results of the presidential elections, Minsk, Belarus, 06 September 2020. EPA-EFE/STRINGER

The mass detention and deportation journalists in Belarus on the back of widespread internet access restrictions are leading to one of the worst media freedom crackdowns anywhere in Europe in recent decades, the International Press Institute (IPI) said today.

In the latest crackdown on journalists covering nationwide anti-government protests, three journalists were detained during a Women’s March in Minsk on Saturday, September 5. Green Portal journalist Nasta Zakharevich, detained that day in the Belarusian capital, was sentenced to seven days of detention for participating in an unauthorized street action, according to the Belarusian Association of Journalists (BAJ).

Two journalists for the independent TV station Belsat, Maksim Gorchenok and Alyona Dubovik, were released three hours after their arrest on September 5. Their mobile phones and video camera were seized and a protocol was drawn up for “working without accreditation”.

Radio Racyja journalist Artsiom Sizintsau was detained during the coverage of the March of Unity on September 6. He is still in the pre-trial detention center in Minsk. The trial is set for September 8. Another two journalists were also detained while covering week-end protests: BelaPAN correspondent Ales Asiptsou in Mahilou and Zmitser Kazakevich in Vitsebsk. They were both released.

The latest crackdown brings the total number of journalists and media workers detained in the last month to at least 170, according to the BAJ, which has been monitoring the situation. Another 20 have been stripped of their accreditation.

“The situation in Belarus is unprecedented: in over four weeks more than 170 journalists have been detained and nearly 20 have been deported, not to mention numerous allegations of beatings and rights abuses by police and security forces”, IPI Deputy Director Scott Griffen said.

“We call on the Belarusian authorities to put an end to the arbitrariness and violence against local and foreign media reporters and media workers. The authorities’ actions are a severe violation of press freedom and the public’s right to information on the ongoing protest movement.” 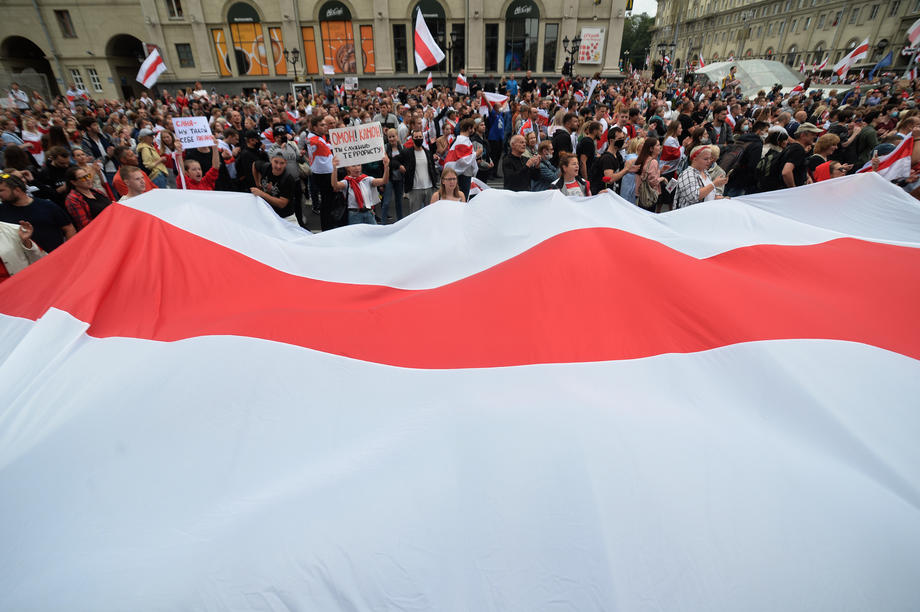 Over the past four weeks, protests over presidential elections widely viewed as fraudulent have continued in Belarus.

The struggle for the right to produce independent media coverage has also reveberated within Belarusian state television. On August 17, strikes began on state channels as journalists, editors and technical workers began to leave their posts. As a result, 100 out of 300 employees of the state-owned Belarus 1 TV channel resigned.

After President Alexander Lukashenka’s call-up, they were replaced by teams of technical specialists and journalists from Russia, mainly from Russia Today (RT).

Several journalists were also detained on September 1, which marked the beginning of the new academic year for schoolchildren and students. According to the Russian newspaper Kommersant, Tut.by correspondents Nadezhda Kalinina and Aliaksei Sudnikau; employees of Komsomolskaya Pravda in Belarus Sviatoslav Zorki (Siarhei Shchogaleu), Mikita Nedaverkau (Mikita Dubalenku), and Maria Eleshevich; and BelaPAN representative Andrei Shauluha were detained in Minsk.

They were accused of participating in an unauthorized action, for which a fine or administrative arrest is provided. Other journalists of the Russian media RIA Novosti and NTV were also detained and released after their documents were checked.

On September 2, six detained journalists were transferred to a pre-trial detention center on Akrestsin Street in the Belarusian capital. According to the BAJ, at the time of their arrest all employees had press jackets and IDs. On September 4, all of them were found guilty of participating in an unsanctioned mass event and sentenced to three days in prison. They were all released on the same day, as on the basis of time served, having been in a pre-trial detention center since September 1.

On the evening of September 3, more than 30 journalists from Belarusian non-state media asked to meet with Interior Minister Yury Karaev to learn about the fate of their detained colleagues. The minister did not appear but instead offered to make an appointment. TUT.BY photojournalist Dmitry Brushko was detained while covering the events and released that evening.

Back in August, 692 journalists appealed to Minister of Information of Belarus Igor Lutsky regarding the situation regarding the detention of journalists. They asked him to take urgent measures to stop the attacks of law enforcement agencies and the detention of media representatives. As the BAJ reported on September 4, in a response letter, the head of the Ministry, Igor Lutskiy, noted that they “support the position on the inadmissibility of violence against journalists performing their professional duties”. He also stated that an agreement has been reached with the Ministry of Internal Affairs on the prompt resolution of issues arising from the coverage of mass events by journalists. However, the Ministry “does not have the authority to give a legal assessment of the actions of law enforcement officials”.

Authorities have targeted not only Belarusian journalists, but also foreign correspondents, putting independent global coverage of the events at stake. Last week IPI condemned Belarus for cancelling the accreditation of numerous foreign journalists.  Far from a new phenomenon, these tactics of stifling media coverage and barring journalists from working follow a well-rehearsed pattern of repression honed during Lukashenko’s 26 years in power.