“To our followers: The Népszabadság newsroom learned at the same time as the public that the paper was suspended with immediate effect. Our first thought is that it is a coup. We will get back to you soon.”

With that short status update on the Facebook page of its web edition (nol.hu), Hungary’s biggest opposition daily newspaper broke the news on Saturday, Oct. 8 that it had been shut down by its publisher. The move, which involved not only the suspension of the print edition, but also the erasure of the paper’s online edition and archives from the Internet without a trace, came completely unexpected.

Népszabadság’s staff and newsroom had been scheduled to move into new offices the next day. Journalists had even planned for the occasion a small inauguration party with drinks and pizza.

But instead of pies in a cardboard box, they received an urgent notification from the publisher, Mediaworks, informing them that their work would not be needed for an indefinite period of time.

Both these complicated legal conditions and the initial shock of being suspended effective immediately pushed Népszabadság’s journalists to bring their newsroom activities to social media.

As soon as the journalists realised on Oct. 8 that they no longer had access to their company emails or to the online edition, they moved quickly to post the closure announcement on nol.hu’s Facebook page. On the following day, they created a new Facebook page called Népszabi szerkesztőség (“Népszabi newsroom”, using a colloquial name for Népszabadság).

The new Facebook page gathered more than 50,000 fans in a heartbeat.

“So many new fans joined us that Facebook had to suspend the invite function for a while,” Népszabadság journalist Anita Kőműves told the International Press Institute (IPI).

But “Népszabi szerkesztőség” wasn’t the only new Népszabadság page on Facebook to appear. The paper’s staff noticed that a number of fake pages began to pop up – and began to communicate in Népszabadság’s name.

Kőműves explained: “When we asked them to reveal their identities, they refused. And when we wanted to find out why they would speak as if they were representing the newsroom, they gave us vague answers, saying that freedom of speech allows all people to express their opinion and so they have the right to do so.”

Népszabadság journalists reported some of the pages to Facebook, which took them down. Some, however, still exist. The page for “NépszabadságOnline.hu”, for instance, has almost two thousand followers. “Népszabadság Besttop” has stagnated at around 700.

The aim of these pages is not clear, though Kőműves said she suspects it is to “generate confusion, create division and spread misinformation”.

Neither she nor her colleagues have been able to confirm the identity of those behind the pages. 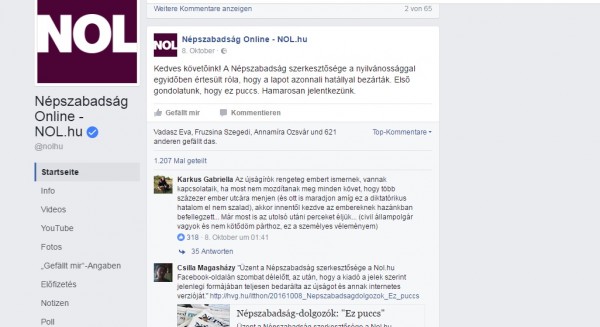 Screenshot of Népszabadság’s closure announcement on the Facebook page of the former paper’s online edition, nol.hu.

Between the personal and the professional

One of the paper’s first stories to be (re)published on Facebook – on the alleged corrupt affairs of György Matolcsy, president of the Hungarian National Bank – was written by Népszabadság journalist Roland Baksa. While he is a longtime user of Facebook, Baksa, who has gained more than a thousand followers since the Matolcsy story, said using social media as his main journalistic platform was a new experience. Like many of his colleagues, he does not have separate personal and professional Facebook pages

In interviews with IPI, Népszabadság journalists said they paid little attention to their social media activity until being locked out of their traditional communication and publication platforms. Previously, they updated the paper’s Facebook page, but there was no team in place dedicated to social media management. Journalists did not brand or advertise themselves extensively on Facebook. (A notable exception is Péter Pető, a deputy editor who has maintained a professional account dedicated to his journalistic activity.)

The journalists’ sudden immersion into the world of Facebook-centred journalism comes at a price: their personal accounts are widely exposed to the public eye. The potential for harassment is clear – though not necessarily in the form one might expect.

Such exposure holds the most risks for women. Csilla Urbán, front page editor for nol.hu, told IPI she previously received numerous patronising and/or sexist comments on the site’s comment systems. Users frequently called her a “bitch” or “stupid girl”, or questioned her work due to her gender.

Interestingly, Urbán noted that this type of vulgar harassment had largely disappeared since the newsroom moved to Facebook.

“What I do receive is a lot of friend requests from obviously fake accounts, and some coffee invitations,” she said.

Suspicious forms of communication are not limited to page admins.

Baksa recounted: “I often receive messages that at first seem to be supportive and friendly, but later in the conversation it feels as if the sender wanted to be taken into my confidence. After researching the sender’s profile, it turns out that the style and phrasing of the messages are not in tune with the profile.”

He suspects that competitors or intelligence agents may be behind the fake profile friend requests and messages. Like Urbán, Baksa said he had not received any verbal attacks or “regular” vulgar troll comments. 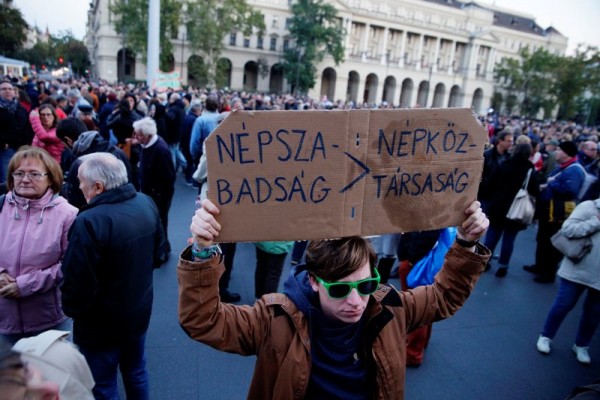 A demonstrator shows support for Nepszabadsag on October 8, 2016. EPA/Zoltan Balogh

Other Népszabadság journalists paint a similar picture of their experience being increasingly exposed to the public eye via social media. Instead of battling rhetorical aggression, vulgar trolling and other more straightforward forms of online harassment and bullying, they encounter more “sophisticated” trolls.

Kőműves describes them as “civilised perturbers”, explaining: “They write their comments with correct spelling and in a moderate tone, but tirelessly emphasise the same things, that we are divided and have multiple Facebook pages, and so on.”

“All the similarities and recurring themes and phrasings in their argument suggest that they might be part of a bigger, organised propaganda effort,” she said. “But, of course, we have no proof of that.”

The blurring of personal and professional identity on social media is likely to present a continued challenge for Népszabadság’s journalists as they navigate their uncertain future. But most say they are willing to put up with it.

Urbán summed up her view: “I am proud of being part of this community. I don’t want to hide.”

This article is part of IPI’s digital media initiative, OnTheLine, which tracks online harassment of journalists and independent news websites.