Authorities must condemn all attacks and threats against the newspaper, including by Chechen officials

The International Press Institute (IPI), a global network of editors, media executives and leading journalists for press freedom, today condemned the latest attacks on the independent Russian newspaper Novaya Gazeta. IPI calls on the Russian authorities to protect independent media and thoroughly investigate the threats against the newspaper and its staff.

On Monday, March 15, journalists from the investigative newspaper smelled a pungent chemical odour outside their offices in Moscow. An unidentified chemical substance was later found at the entrance. The newspaper published a video taken from a nearby surveillance camera in which a person in a Yandex courier uniform can be seen riding a bicycle toward the building and spraying some unknown gas in front of the office. According to media reports, the emergency services said afterwards that the concentration of toxic substances had not been fatal.

The motive behind the attack is not clear. The threat came on the same day that three NGOs filed lawsuits against the Russian mercenary group Wagner for torturing a Syrian detainee, which was revealed in another investigation published by the newspaper in 2019.

The chemical attack was not the only instance of intimidation the newspaper faced last week. Also last Monday, Novaya Gazeta published an interview by journalist Elena Milashina with a former member of a Chechen special police who described abuses and killings committed by that police force in Chechnya, as well as other reports of unlawful arrests, torture, and killings committed by Chechen police.

In a video posted on Instagram, the accused Chechen special police unit responded by asking Russian President Vladimir Putin to stop the “vile attacks” by Novaya Gazeta, which has investigated cases of torture carried out by the regime.

The Kadyrov regiment posts an IG video where they basically tell Putin if he doesn’t stop @novaya_gazeta‘s investigations into allegations of torture by the regiment, “one of us” may be forced to take things into his hands to stop it. pic.twitter.com/9xu1DVbluV

Chechnya’s information and press minister, Akhmed Dudayev, criticized Novaya Gazeta in another Instagram post on March 17 for publishing the reports on abuses committed by Chechen police and called on the government to prevent the newspaper from publishing investigations into the Chechen law enforcement agency.

As reported by Meduza, a demonstration took place in the Chechen capital of Grozny on the same day, with protesters calling for the closure of Novaya Gazeta.

As reported by independent news outlets, the government responded with a statement by Kremlin spokesman Dmitry Peskov on March 18, who said that such complaints must be resolved by the judicial system.

“We strongly condemn the recent attempts to intimidate Novaya Gazeta, and call on the Russian authorities to investigate all attacks against the newspaper, and to denounce threats to it and its journalists made by politicians, including Chechen officials”, IPI Deputy Director Scott Griffen said.

“Novaya Gazeta and its courageous reporters have repeatedly been the target of intimidation and violence in retaliation for their investigative work. The Russian state must take threats to the newspaper extremely seriously as part of its obligation to protect the safety of journalists in the country. Russia’s failure to punish those responsible for attacks on journalists in the past is contributing to the risk faced by Novaya Gazeta and other independent media.”

“The public should stand up for the free work of journalists”

“It is not the first intimidation of Novaya Gazeta journalists, but perhaps one of the most brutal, considering the obvious threat to journalists’ lives”, Nadezda Azhgikhina, the director of PEN Moscow, told IPI. “Novaya Gazeta is the newspaper with the most journalists killed or sickened in Russia, and all these killings were preceded by intimidation.”

Chechnya occupies a special position within Russia and is often not considered by the public as part of the country, which is why problems that arise in the region often receive little public attention, Azhgikhina explained. “It is a real danger for Novaya Gazeta because there are real fanatics and radicals there”, she said. “The Chechen state does not respond to these threats and does not stop religious fanatics. It is clear that the Chechen leadership supports this intimidation”.

The environment for independent media in Russia is becoming increasingly hostile, with numerous journalists being arrested or assaulted in the course of the protests earlier this year, as well as the recent arrest of Sergei Smirnov, editor-in-chief of Mediazona, for a tweet that allegedly called on people to join the protest.

“Journalists have never been subjected to such strong aggression by law enforcement agencies as this year,” Azhgikhina said, stressing that for the protection of media in Russia, “the public should stand up for the free work of journalists”.

In a statement published, the European Union commented on Russia’s intensifying actions against independent media, expressing “serious concern about the worsening situation of media freedom in Russia”.

The European Union denounced recent cases of legal prosecution of journalists, including Svetlana Prokopyeva, Ivan Safronov and Sergei Smirnov, as well as unresolved cases of violence against journalists and the many cases of physical assault and arrests of reporters who covered the nationwide protests after the arrest of Alexei Navalny. It has directly called on the Russian government to uphold its obligation to ensure the safety of media actors.

The EU has also criticized the crackdown on news outlets through the so-called “foreign agent” law, which allows Russian authorities to classify journalists and other media actors as “foreign agents” and impose restrictions on them, as well as other recently adopted laws that allow authorities to exercise online censorship.

According to the IPI COVID-19 Press Freedom Tracker, at least eight cases of attacks on press freedom in Russia could be observed in the course of the pandemic. In particular, Russia is among 18 countries that have passed a law against “fake news” and misinformation amid the pandemic, which Russian authorities have used as a means of suppressing critical reporting and controlling information.

Novaya Gazeta, co-founded in 1993 by former Soviet leader Mikhail Gorbachev, has been targeted repeatedly since the founding of the newspaper in 1993. The recent events follow a long series of attacks on the newspaper, known for its investigations into corruption and human rights abuses.

Among the most prominent was the 2009 murder of Natalia Estemirova, a Chechen human rights activist, member of the Russian NGO Memorial and writer for Novaya Gazeta, who was reportedly forced into a car in Grozny and later found dead in a forest with multiple gunshot wounds to the head and chest.

The newsroom has also received repeated threats, such as a letter containing an unidentified white powder in 2017 or when a goat’s head with a warning to the newspaper was found near the office in 2018 .

Last year, Ramzan Kadyrov, the Chechen leader, criticized Novaya Gazeta’s coverage of the spread of COVID-19 and the human rights situation in Chechnya, in particular articles written by Elena Milashina.

Ramzan Kadyrov has been in power in the autonomous Russian republic of Chechnya since 2007. He succeeded his father Akhmad Kadyrov after his assassination in 2004. His regime has been repeatedly accused of suppressing, torturing, and killing political opponents as well as journalists and members of the LGBTQ community. 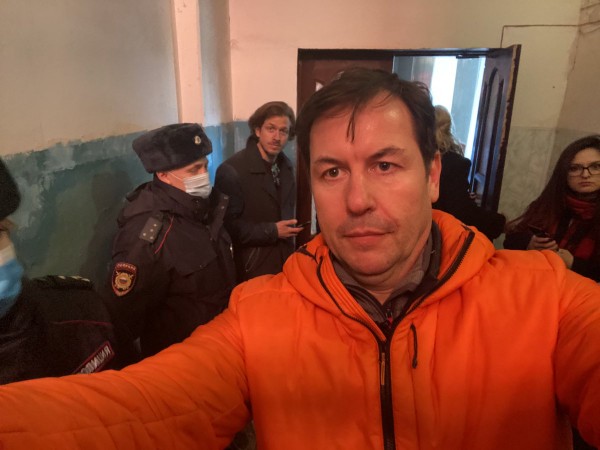