Paywall transition pays off for leading regional daily during pandemic

La Voz de Galicia is a 130-year-old regional daily newspaper based in A Coruña, northwestern Spain. Born as a liberal newspaper, it is the highest-circulation newspaper in the Spanish region of Galicia (pop. 2.7 million).

The digital edition launched on May 17, 2000. As was common across most digital media outlets, La Voz de Galicia initially ran an advertising-oriented model, Chief Digital Officer Tomás García Morán told the International Press Institute (IPI). “But about three or four years ago, we realized we were not competitive enough to yield the necessary revenue to sustain our business”, he said. “It is difficult to compete against tech giants like Google, Facebook, and Amazon. Their technological capability turns us into the weakest link in the value chain, and regional media outlets feel the pain much more than national and international news organizations.”

This frustration, however, led to the launch of a reader revenue strategy, with La Voz de Galicia becoming one among the first media outlets in Spain to set up a paywall.

For García Morán , a reader revenue model is the safest bet to put La Voz de Galicia on a more sustainable path. “There may be other formulas, to be sure, but we don’t like what we’ve seen so far”, he said. “Many local media outlets have disappeared or have been acquired by actors whose interests are beyond journalism. Others have turned to digital with a different name and with a clear political agenda to attract readers. That doesn’t mean we won’t do our best to maintain a decent advertising strategy. However, I think that model is peaking. The number of subscribers and the pricing model will determine the future and the size of news media outlets.”

This reader revenue strategy has proven to be a smart move for La Voz de Galicia, especially since the outset of the coronavirus pandemic. “We set up our paywall in November 2019. Before March 2020, we had 3,500 paying digital subscribers”, García said. “By the second half of March, we had doubled that number, reaching a milestone in our strategy. Right now, combining new digital subscribers and print and digital subscribers, were are about to reach 20,000.”

This surge in paying subscriptions was possible despite the management’s refusal to drop the paywall on coronavirus information, unlike other news media outlets. This provided a tremendous boost to the news organization. “There was a hot debate about whether it was appropriate to drop the paywall, but we decided to keep it because we were committed to our existing subscribers and because, well, we had spent 20 years offering online news for free. There comes a time when you have to make a decision. You can’t just give it all for free. Ours is still a fledging business, and people are just beginning to understand that paying for news necessary.”

A change of approach

La Voz de Galicia’s experience during the first wave of the coronavirus pandemic spurred them into rethinking their model. “We have found a balance between a transactional proposition, whereby you pay for a news product, and a support model, where readers pay because they believe in a cause, in a certain editorial project”, García Morán said. “We don’t have a sharp focus on politics, like eldiario.es (a national news media outlet that has successfully built a sustainable model based on patrons). But we know we are a key player in our community, so we sent a message asking for support because we are providing and advocating for a public good. This message led to a steep growth in subscriptions, which extended well into the summer.” 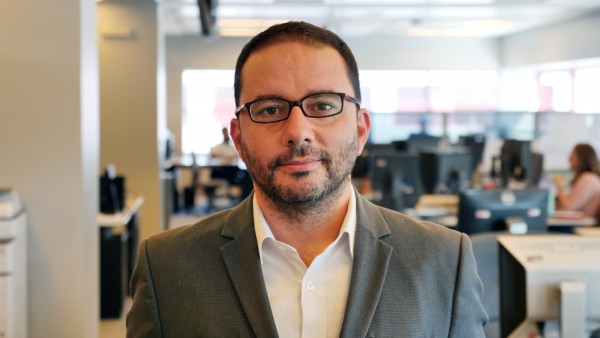 For García Morán, part of the newspaper’s value proposition lies in the proximity to its readership, a strategy that is difficult to develop and expensive to maintain. “We run local and regional stories that are widely read across Galicia, and we want to pursue that model and make it sustainable and profitable.”

Betting on a subscription model means knowing your readership well and implementing ways to learn what they want. How has La Voz de Galicia built a loyal readership? “We’re not that concerned anymore about reaching a super-large audience but about building a loyal readership. Galicia has a population of 2.7 million. We closed November with 14 million unique visitors. That is one of the reasons why the advertising model is peaking. We are focusing on that cluster of loyal readers. We have a daily average of one million readers right now, a large number of whom are occasional readers coming from social media. Most of them, about 650,000 users, are highly loyal readers, 250,000 of whom, approximately, are registered.”

How to build a loyal readership

To build a loyal readership, García Morán stresses the importance of creating quality content and newsletters. “It took us a while to start sending newsletters, but now we have three or four valuable offerings. “Hoy en La Voz” features the most relevant news of the day and is sent every morning at 8 am to 150,000 subscribers. That is one of the main ways to get new readers into the funnel and convert subscribers.”

Regarding the way this model shapes the outlet’s journalism, García Morán is optimistic. “The good news about all this is that journalism is back. In today’s media landscape, the performance of journalists is paramount because creating good content may translate into, say, 20 new subscribers per piece. Journalists and readers are at the centre of this model. Newspapers have traditionally been unidirectional channels, so this is a paradigm shift, and we as journalists like to see how something we have written is working, even more so amid a serious crisis and in a context in which the sector is transforming.”

Is there anything that La Voz de Galicia learned during the coronavirus pandemic that will continue doing in the future? What have García Morán and his team learned from this experience? “We haven’t learned much, really”, García Morán said. “We know little about how all this works. We are learning every day. Here we are as journalists with little or no previous knowledge of how e-commerce works. We don’t know how people want to spend their money. There’s a lot to be learned. On the side of content, it is hard to generate worthy and valuable content, so readers won’t go somewhere else to read it for free. That’s what we are focusing on right now.”

In this spirit, the outlet is heading towards a model that puts journalists on the front line so they can decide what content to put behind a paywall and what content deserves to be open, García Morán said. “And that is something that only journalists can decide. Otherwise, that’s it for us. In Scandinavian news organizations, they follow this editor-centred model. The CEO of the company is a journalist. We want that as well. We are a business run by journalists.”