Renowned Portuguese editor and IPI World Press Freedom Hero Nuno Rocha, who played a crucial role in defending press freedom in Portugal during the country’s transition to democracy in the 1970s, died on Tuesday, July 5 of complications from pneumonia. He was 83.

“I remember [Rocha] as a person who stood firmly and steadfastly for freedom of expression and the media, expressing his views emphatically but without bombast or rhetoric,” IPI World Press Freedom Hero Raymond Louw, who served on the IPI Executive Board with Rocha between 1980 and 1984, recalled last week.

“He edited newspapers in [Portugal] under impossible circumstances brought on by authoritarian and dictatorial governments which tried to destroy freedom of the press and other media.”

Born in Porto in February 1933, Nuno Augusto Ferreira Alves Rocha was editor-in-chief of the weekly Diário de Lisboa when a group of military officers overthrew Prime Minister Marcello Caetano on April 25, 1974. The bloodless coup brought an end to the Estado Novo – the authoritiarian regime founded by Antonio Salazar in Rocha’s birth year – in what became known as the Carnation Revolution.

A seven-member military junta that replaced the government initially inspired hope for more fundamental freedoms through its pledges of liberal reforms. A few days after the junta took power, Rocha told attendees at IPI’s 23rd General Assembly in Kyoto, Japan: “In Portugal, 48 years after it was trampled underfoot, the flower of liberty opened its petals on the 25th of April and with it was reborn the freedom of the press.” 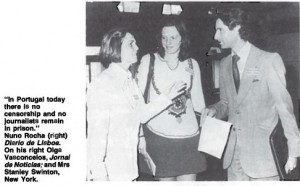 However, this optimism quickly passed. In September 1974, the junta’s leader, General António Ribeiro de Spínola stepped down and warned of a growing communist influence. An attempted counter-coup by high-ranking right-wing officers in March 1975 led to a sharp political shift to the left and the creation of the Supreme Revolutionary Council.

“Those in power [revolutionary military officers and the Portuguese Communist Party], aware of the importance of the press… managed to penetrate the press milieu and dominate it completely,” Rocha later told IPI. “A year after the revolutionary action, most of the newspapers in Portugal were in the hands of communist directors and journalists.”

A pro-communist journalist was appointed to share Rocha’s office and oversee his work, leading to many of Rocha’s articles’ being censored during this period. Increasingly frustrated, Rocha left Diário de Lisboa in early April 1975 and attempted to start a new publication. Shortly thereafter, however, Rocha was arrested and accused of involvement with criminal organisations and the CIA. He was detained at the old fortress of Caxias, near Lisbon, but was released after 17 hours in custody following an international outcry and protests by IPI.

Unshaken, Rocha published the first edition of a new weekly, Tempo, 45 days after his release. By the time the more moderate General António Ramalho Eanes was elected president in July 1976, Tempo was the best-selling newspaper in Portugal with a circulation of 150,000.

Rocha left Tempo in 1988 to become a professor of journalism. He later became the director of the journalism school at Lisbon’s Universidade Independente in 1995. He founded Media XXI magazine in 1996.

After being recognised as an IPI World Press Freedom Hero in 2000, Rocha set his sights on promoting media freedom in Portugal’s former colonies. He stepped away from public life in 2002 after suffering a stroke. 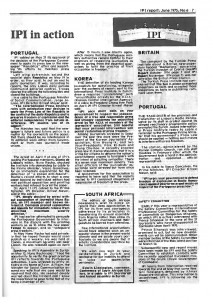 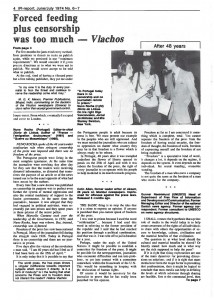 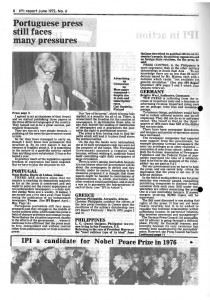 Address of Nuno Rocha to IPI’s 23rd General Assembly in Kyoto, Japan, 1974.
“In Portugal, 48 years after it was trampled underfoot the flower of liberty opened its petals on the 25th of April and with it was reborn the freedom of the press, the right of every journalist to co-operate with his people to help mankind in its march toward progress.”

Address of Nuno Rocha to IPI’s 24th General Assembly in Zürich, Switzerland, 1975.
“The press is free, having only to find the paths which will lead it to place itself above the political battles .”