For four months, Belarusians have been peacefully demonstrating for democracy. Meanwhile, the journalists reporting this story have been arrested, fined, beaten, deported or denied accreditation amid the Lukashenko government’s crackdown.

The International Press Institute (IPI) today published a full-page print advertisement in The Washington Post calling on the international community to stand up for press freedom in Belarus.

As of December 3, at least 451 journalists in Belarus have been detained with up to six still behind bars, according to figures from the Belarusian Association of Journalists (BAJ). IPI has monitored attacks on both Belarusian and foreign journalists as the Lukashenko regime tries to conceal its suppression of pro-democracy demonstrations.

The ad is running on December 9, exactly four months after long-time ruler Lukashenko claimed victory in elections that were widely viewed as fraudulent. Hundreds of thousands of demonstrators have since repeatedly taken to the streets despite threats of arrest and violence.

Scores of journalists covering the protests have been rounded up. Some are released hours later, while others are fined or detained for longer periods, often on charges of participating in “unsanctioned” events or working without accreditation. Numerous reporters have been subject to assault. Not long after the outbreak of protests in August the Belarusian authorities cancelled the accreditation of and/or deported dozens of journalists working for major international news outlets.

“It is imperative that the world not forget the ongoing events in Belarus”, IPI Deputy Director Scott Griffen said. “Press freedom and democracy go hand-in-hand. The journalists bravely working to tell this story to the world must be supported and defended. Our message is clear: The international community must help stop the crackdown on Belarus’s press.”

The ad is being run as part of The Washington Post Press Freedom Partnership, an ongoing initiative that aims to highlight organizations working vigilantly to promote press freedom and raise awareness of the rights of journalists worldwide. 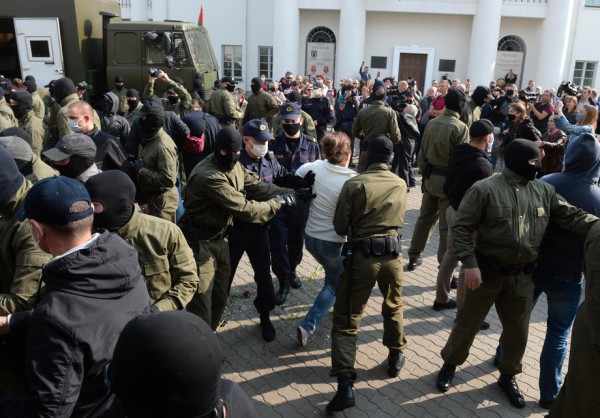