However, the decision, issued on Sept. 25, is accompanied by an ultimatum warning that SECOM could restart the proceedings if and when it considers that Fundamedios has supposedly again committed activities of a political nature. “[…] [T]his [body] has resolved to discontinue the administrative proceedings for dissolution initiated against Fundamedios, under a last warning that this social organisation [must] respect its statutory norms, in particular the prohibition of conducting activities of political nature, avoiding putting out unfounded alerts […]”

SECOM had started the proceedings to dissolve Fundamedios on Sept. 5, having determined that the organisation had violated its statute by promoting through its social media channels two political blogs that were critical of the government of President Rafael Correa.

IPI Executive Director Barbara Trionfi said that despite the good news, “the warning that accompanies SECOM’s resolution is a clear offence against freedom of information. It represents an ultimatum seeking to intimidate the members that form part of Fundamedios and make their work of monitoring violations of press freedom in Ecuador more difficult”.

Speaking to IPI, the executive director of Fundamedios, César Ricaurte, called the decision a “victory for democracy and human rights in Ecuador”. But he added that he was worried about the “direct threat from SECOM to stop producing alerts [about violations of freedom of expression]”. Ricaurte called on “the national and international community to remain vigilant regarding what may happen because, obviously, Fundamedios is not going to stop producing alerts on attacks against the press in Ecuador”.

The possible dissolution of Fundamedios sparked a wave of rejection from academics, journalists and both national and international organisations. The reaction, Ricaurte said, helped at the last minute to force the Ecuadorean government to backtrack on its intentions to close the group.

Since its founding in 2008, Fundamedios has recorded 1,320 attacks on the press in a country in which, according to Ricaurte, “unfortunately, the main aggressor against Ecuadorean journalism is the government.” 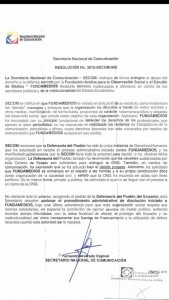