Urges Azerbaijan to drop all charges against her and all journalists

Journalist Khadija Ismayilova sits at a laptop computer as she inspects the page of Panama Papers. Photo/Aziz Karimov.

The International Press Institute (IPI), a global network of editors, media executives and journalists, today welcomed the judgment of the European Court of Human Rights (ECtHR) in the case of Azerbaijani investigative journalist Khadija Ismayilova and called on Azerbaijan to implement it.

The ECtHR today ruled that the 2014 arrest, detention and prosecution of Ismayilova was a violation of her rights under the European Convention on Human Rights. The court said that Azerbaijan violated the journalist’s right to liberty under Article 5 of the convention as her arrest was not based on a “reasonable suspicion” that she had committed any crime.

“The judgement is an important victory for press freedom in Azerbaijan, a country where the government has made every effort to silence critical journalists”, IPI Deputy Director Scott Griffen said. “We call on Azerbaijan to fully enforce this ruling and to end its harassment of Khadija Ismayilova and all other journalists in the country.”

In its judgement, the court also said that Ismayilova’s arrest was in violation of Article 18 of the Convention as it was “driven by improper reasons and that the actual purpose of the impugned measures was to silence and to punish the applicant for her journalistic activities”. The court further stated that by referring to Ismayilova as guilty in a public statement, the prosecution had denied her right to be presumed innocent until proven guilty, a violation of Article 6 of the Convention. The court ordered Azerbaijan to pay €25,000 in damages and costs to the journalist.

According to Ismayilova’s lawyers, Amal Clooney, and Nani Jansen and Alinda Vermeer of the Media Legal Defence Initiative (MLDI), she could still be targeted by the Azerbaijani government as she is on probation until 2021, which can be terminated on flimsy grounds and converted into a three-and-a-half-year sentence. Her assets are still frozen, and she has no access to her bank accounts. Moreover, a travel ban has been imposed on her, which prevented her from being with her mother at the time of her passing away.

Azerbaijan has a dismal record of press freedom, where the government has vindictively pursued journalists for their work and in some cases jailed them. In January 2018, Afgan Mukhtarli was sentenced to six years in prison on charges of smuggling, illegal border crossing and assaulting state officials. Mehman Huseynov, a photojournalist and blogger, was released on March 2, 2019 after spending two years in prison on trumped-up charges of defamation. 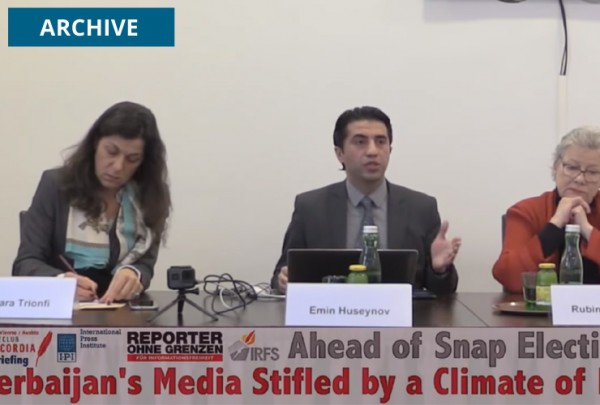