The IPI global network today expresses grave concern over the move by the business tycoon owner of the Kyiv Post to immediately suspend publication of Ukraine’s largest independent English-language newspaper and fire its entire newsroom.

“Yesterday’s announcement is a major blow to independent journalism in Ukraine”, IPI Deputy Director Scott Griffen said. “The Kyiv Post has been a bastion of professional reporting and the international community’s main source of English-language news in the country for 26 years. During this time, the newspaper has faced multiple threats, from censorship to political meddling: but never has its independence been threatened more than now.

“This dismissal of its entire newsroom is a serious blow to the many staff there who have worked tirelessly to maintain its high levels of quality and professionalism, as well as an existential threat to its independent journalism. We urge the owner, Adnan Kivan, to immediately reverse the closure of the newspaper and the dismissal of its staff. Failure to do so will leave his clearly stated commitment to defend the newspaper’s editorial independence in shreds.”

On 8 November, a brief text appeared on the newspaper’s website announcing that it would be closed “for a short time” with an accompanying a quote from its owner Kivan: “One day, we hope to reopen the newspaper bigger and better”. No reason was given for the closure.

Immediately after, journalists at the newspaper began circulating a statement on social media which announced that the newsroom had turned up to work that day only to be informed by the chief editor that they had all been dismissed. IPI understands around 50 staff lost their jobs. All reporters and editors were blocked from accessing the website right after the staff meeting.

Kivan, a construction and real estate tycoon in Odessa, bought the Kyiv Post in 2018 with a pledge not to interfere with its editorial independence. However, reporters said that three weeks ago he announced plans to launch a separate Ukrainian-language news outlet under the newspaper’s brand and had already hand-picked its chief editor.

In the statement, the reporters said they had seen this surprise move as “an attempt to infringe on our editorial independence” and that their efforts to challenge the changes had “elicited opposition from the owner”. “We consider the cessation of the publication and the dismissal of the paper’s staff to be an act of vengeance by Adnan Kivan”, it said.

“We believe that this way the owner deprives uncomfortable, honest and principled journalists”, the statement added. The journalists said they had urged Kivan to sell the newspaper or hand the Kyiv Post trademark to the editorial office, but that negotiations were unsuccessful.

According to the official announcement, the Kyiv Post’s long-standing chief editor, Brian Bonner, had announced his retirement. Sources at the Kyiv Post who spoke to IPI off record said that Bonner had been fired along with the other staff but would remain on for a short time to preserve the archives of the newspaper.

IPI understands that Kivan plans relaunch the English-language version with an entirely new team by the end of the year. Novy Chas reported on Monday that the newspaper and its news websites will be re-launched in four languages: Ukrainian, Russian, English and Arabic.

The new Ukrainian-language edition will reportedly be run by Olena Rotari, the current manager of Channel 7, the other media outlet owned by Kivan. His Kadorr Group purchased the television station amidst Ukraine’s Maidan revolution in 2014. Since then, sources at the Kyiv Post told IPI that concerns had grown about its increasing lack of independence.

Alarm bells were then set ringing on October 14, when Rotari announced on Facebook that Channel 7 was hiring more staff due to the launch of a Ukrainian-language version of the Kyiv Post, which would have its own editorial content and staff. Bonner responded at the time saying he had not been made aware of any such plans. Rotari quicky removed the post.

Only then did Kivan make his intention to launch a separate edition clear to the Kyiv Post. Sources told IPI that Bonner had led the pushback and insisted that any major changes would first have to be approved by the senior management. Staff also insisted that new appointments for the Ukrainian-language edition be made in the normal way, rather than by another editor selected directly by Kivan. Journalists had also raised concerns about the division of the Kyiv Post into separate entities, which they feared could jeopardize its closely guarded independence.

After weeks of negotiations and protests by staff, the impasse was broken when Kivan made the decision to dismiss the entire staff. All editorial staff, journalists, foreign correspondents, editors and the commercial staff were fired. The news was broken to the team by Bonner during the regular Monday morning meeting, which was not attended by Kivan. Last-ditch calls by staff for the sale of the newspaper to another owner were unsuccessful.

Long seen as the country’s most trusted and influential source of English-language news, the outlet has faced multiple forms of pressure and censorship over the last few decades, most recently in the form of acquisition bids by oligarchs linked to the then-president of Ukraine, Viktor Yanukovych. Until now it has managed to retain its editorial independence.

When the previous owner sold the Kyiv Post, Syrian-born Kivan was selected as the safest pair of hands. After he purchased the newspaper, the tycoon made investments and the paper hired new foreign correspondents. Sources told IPI that the new owner initially resisted interfering in its editorial policy under pressure from Ukraine’s Western allies. However, Kivan faced criticism for using other media acquisitions to strengthen his business assets in the Black Sea port city of Odessa.

On Monday, a spokesman for the president of Ukraine said that the news of the closure of the Kyiv Post came as “a surprise to the President’s Office”. “Whatever the reason for today’s news about Kyiv Post, we hope that the publication will continue to work and retain the quality and style that put it at the highest level among the Ukrainian media”, it added. 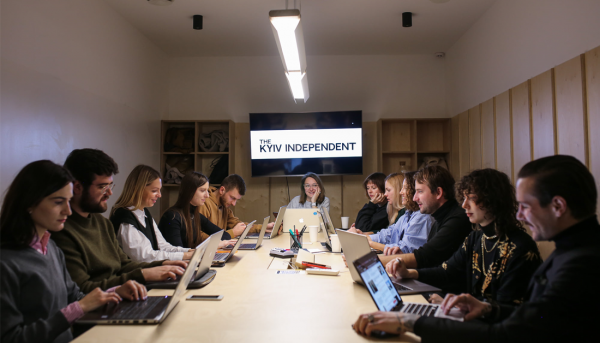