Prokopyeva, a broadcast journalist who works for the local branch of radio station Ekho Moskvy, has been indicted over remarks she made about a bomb attack on the offices of the Federal Security Service (FSB) in the city of Arkhangelsk in November 2018.

The charges stem from a commentary she made on her local radio show in her home city of Pskov one week after the attack, during which she analysed the underlying conditions that drive people in Russia to commit acts of terror. A transcript was later posted online.

Prokopyeva, who also worked as a contributor to the Russian-language service of Radio Free Europe/Radio Liberty (RFE/RL), was placed under criminal investigation, during which her apartment was searched and her electronic devices confiscated.

In September 2019, investigators changed her legal status to “accused” but did not bring a formal indictment. She was forced to sign a non-disclosure agreement and could not leave the Pskov region.

On March 16, Prokopyeva was formally charged by prosecutors with “publicly justifying terrorism” in her journalistic work in a 99-page indictment.

She denies the allegations and has previously described her prosecution as a move to “murder freedom of speech” in Russia.

If found guilty, she could face up to five years behind bars, a spokesman from RFE/RL told IPI. The trial is likely to start in April.

“Seeking to critically analyse the motivations of someone who blew himself up in a terrorist attack must not be equated with justifying the attack”, IPI Head of Europe Advocacy Oliver Money-Kyrle said. “The charges against Prokopyeva must immediately be dropped.”

Last year, several more journalists were summoned and interviewed by the authorities after publishing an open letter written by Prokopyeva, according to Russian media.

The censorship of critical journalistic voices and blocking of independent publications is a common tactic in Vladimir Putin’s Russia. Last year, IPI documented how terrorism-related offences in the Russian criminal code have been used to target other independent journalists. 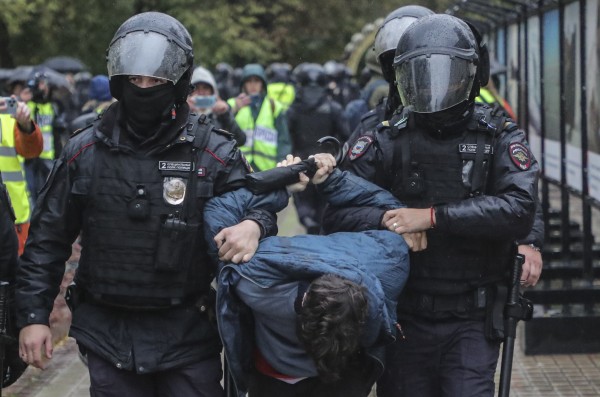 Russia: Over two dozen journalists detained while reporting on anti-mobilization...