Grants of up to €50,000 available for cross-border projects in the European Union and EU candidate countries

Newsrooms and freelancers eligible for funding and support

In total, the IJ4EU fund will provide €1.23 million in direct grants to support investigative journalism on transnational subjects during the 2022/23 funding round.

Read more about the IJ4EU fund and why we’re dedicated to supporting investigative journalism.

To date, IJ4EU has disbursed more than €2.5 million in grants to cross-border projects, allowing hundreds of journalists to conduct ambitious investigations on topics of interest to audiences across Europe and beyond.

The geographical eligibility criteria are the same for both schemes. Applications must be submitted by teams with members based in at least two EU member states or at least one EU member state and one EU candidate country. 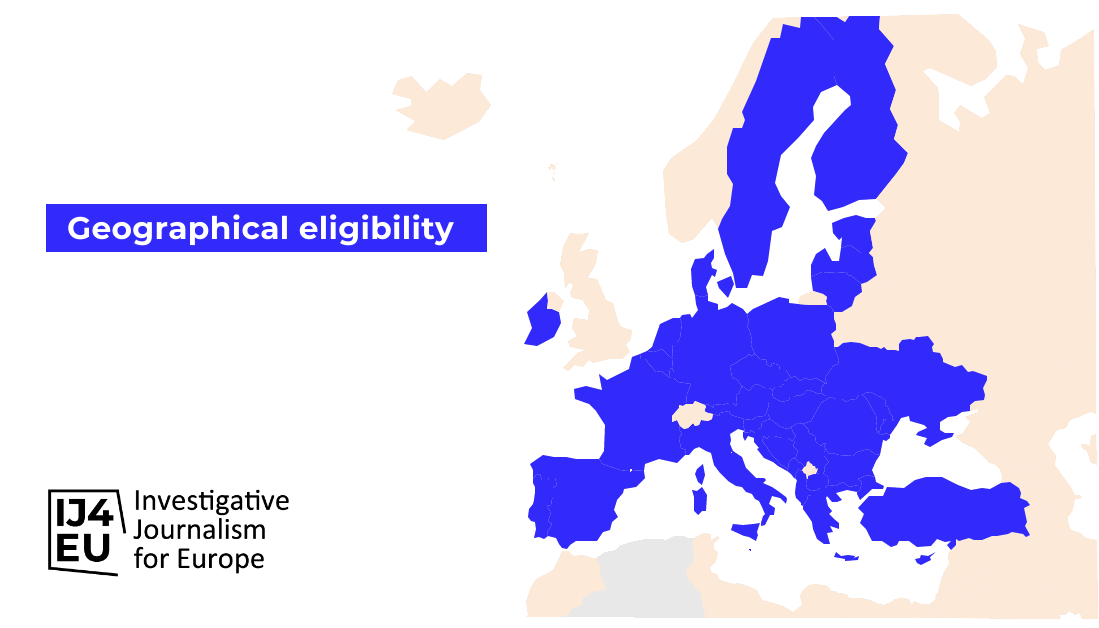 Projects must focus on topics of cross-border relevance. Investigations on all topics will be considered.

The Freelancer Support Scheme is designed for teams whose members operate predominantly outside of newsroom structures. In addition to money, it offers a cushion of tailored assistance in the form of mentoring and training.

The Investigation Support Scheme is open to journalistic teams of any kind that mainly need financing to carry out their investigations.

Both schemes come with editorial assistance, legal support and the chance to take part in specialist conferences.

Teams working in all types of media — including print, broadcast, online media, documentary filmmaking and multi-platform story-telling — will be considered. Projects must aim to be published by media outlets in at least two countries.

IJ4EU grants may be used to cover nearly any type of cost necessary for the production of journalistic content. This includes salary and human resource costs for both employed journalists and freelance journalists, research costs, travel costs, translation costs, and administrative costs.

Grants under both schemes are awarded by independent juries made up of distinguished senior editors, investigative journalists and journalism experts. Read more about the selection process and criteria.

Full details about both funding schemes and how to apply, as well as information about past funded projects, can be found on the IJ4EU website. Read our FAQs about applying.

As threats to press freedom and pluralism multiply, the IJ4EU fund is committed to providing support to investigative reporting as a public good in the European Union and beyond.

IJ4EU (Investigative Journalism for Europe) is a fund to support cross-border investigative journalism. We provide grants to teams of journalists in Europe investigating topics of public interest.

The IJ4EU fund is managed by a consortium of three organisations: the International Press Institute (IPI), the European Journalism Centre (EJC), and the European Centre for Press and Media Freedom (ECPMF).

The IJ4EU programme is co-funded as a Preparatory Action by the European Commission (DG Connect). It receives additional funding from Open Society Foundations, Fritt Ord, Fondation Nicolas Puech and the City of Leipzig. The programme maintains complete independence from donors in the selection of projects and strictly guarantees the editorial independence of all grantees.

Sign up to the IJ4EU newsletter to keep up to date on the latest IJ4EU announcements.