Hungary Pegasus scandal: ‘I was absolutely shocked to see the scale of this surveillance’

This year's CIJ conference focused on the illegal use of cyber surveillance technology; December 2, 2021; Budapest

The IPI global network joined the annual media conference of the Budapest Center for Independent Journalism (CIJ) on December 2 to discuss the disturbing decline of press freedom in Hungary. This year’s focus was on the Hungarian government’s illegal use of Pegasus cyber surveillance technology.

Speakers included IPI Europe Advocacy Officer Jamie Wiseman; Eva Simon, senior advocacy officer at the Civil Liberties Union for Europe; Łukasz Król, digital security trainer at Internews; and Szabolcs Panyi, a reporter for the Direkt36 investigative journalism portal, who was one of the journalists targeted for surveillance by the Hungarian government.

The discussion was moderated by András Lőke, journalist and founder of the Soma prize for investigative journalism. Afterwards, local journalists and experts gathered to continue the panel in Hungarian.

The Pegasus spyware scandal shook the world last July, when Forbidden Stories and a consortium of 16 different news outlets published an investigation into the use of surveillance technology against journalists, activists, and opposition politicians by oppressive governments across the globe.

The surveillance tool, created and sold by Israeli cybersecurity company NSO Group, was used by the government of Hungarian Prime Minister Orbán to illegally spy on journalists, as well as on activists, lawyers, and an opposition politician. Hungarian authorities denied their use of Pegasus until November 4, when a member of parliament from the ruling Fidesz party acknowledged that the Interior Ministry had purchased and deployed the spyware tool.

At least five Hungarian journalists had their phones infected by Pegasus spyware. Alongside Panyi were journalist András Szabó and editor Dávid Dercényi. The other two journalists targeted with the spyware were a photographer who worked as a fixer for visiting foreign journalists and an investigative journalist. Both of them wanted to remain anonymous. The journalists were first contacted by Süddeutsche Zeitung to provide their phone numbers, and later their phones were examined for Pegasus software by Amnesty International.

“I was not surprised that I was surveilled, but I was absolutely shocked to see the scale of this surveillance”, Panyi said during the panel. “The names of journalists and politicians were on the list alongside violent criminals. It was a little humiliating to see my name there, that someone considered me to be a threat to Hungarian national security.”

Simon highlighted the importance generally of differentiating between legal interception and unlawful surveillance techniques. “When using surveillance, the actions have to be proportionate, necessary and serve a legitimate aim”, she said. “In the case of Pegasus we could see that people were surveilled for long periods of time and in ways we have never even heard of before.”

Wiseman, who had covered the abuse of Pegasus against journalists even prior to this year’s revelations, added: “This technology is supposed to be used against organized crime and terrorism, but we are seeing a pattern of abuse of as it being used against journalists, critics, dissidents, and civil rights organizations. In some countries, instead of fighting crime, Pegasus has been used to cover up government crime and corruption.”

According to Panyi, the legal regulation for surveillance in cases of national security in Hungary states that permits can first be given for a three-month period, which can be then extended for another three months. However, he noted that he was under surveillance for seven months. “In my case there had to be a second request after it had already been extended, which is pretty interesting”, he said.

Panyi added: “I was surveilled for seven months, if I did anything wrong, I should be in jail. I am not, I was not even contacted by anyone from the Hungarian security apparatus. I think that’s very troubling.”

Król said there was an urgent need to analyse and regulate the whole spyware industry. “Pegasus is not the only spyware technology out there and NSO Group is not the only company doing this, which is very important to remember”, Król said.

Wiseman shared the same concerns as Król. “If NSO was for some reason to fall, which is unlikely because it has the support of the Israeli government, there are many companies waiting in the wings, able to step up and become a market leader”, Wiseman explained. “Because of the Pegasus Project we are now all criticizing the actions of one company, NSO, but we are not yet really criticizing the actions of the industry itself.”

“It’s a lucrative product to sell”, he continued. “The market is small, but there is a lot of competition. At the moment NSO is completely the market leader, and everyone knows about Pegasus right now. And like Król said, when everyone knows about you as a surveillance organization, that’s not exactly good for business.”

NSO Group is currently facing sanctions by the U.S. government, among other repercussions. The company was added to a U.S. federal blacklist that bars it from purchasing any kind of American technology. 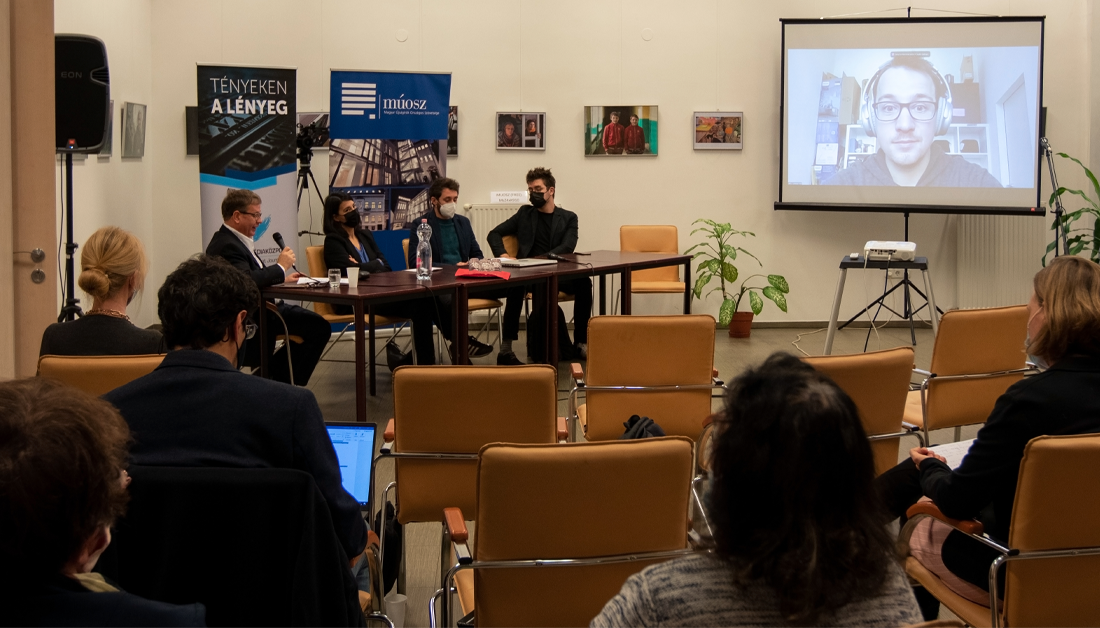 Simon also underscored the importance of regulation of the industry and the possibilities of alternative surveillance techniques, while underscoring that all illegal forms of surveillance must be stopped once and for all. “There should be some sort of transparency and regulation of distribution as well as oversight and enforcement by an independent body”, she said, adding: “What are the legal consequences of using illegal surveillance techniques? Do we have any kind of remedy for the victims?”

No government body, employee, or politician in Hungary has faced legal consequences for the use of Pegasus, and there have been no remedies for the victims of surveillance.

Moreover, in none of the Hungarian cases unearthed by the Pegasus Project did the targets of the surveillance face any kind of prosecution. “This points to the fact that there was no serious evidence against these people”, Panyi said, referring to the victims of Pegasus surveillance.

According to Wiseman, there are already regulations in place in the EU on the sale and purchase of Pegasus-type surveillance technology. Unfortunately, this regulation requires only an annual report to the European Commission, even though the industry is changing rapidly, and it comes with exemptions regarding matters such as national security and commercial rights.

“It’s essentially a get-out-of-jail card for any government which doesn’t want to reveal that they are using this technology or that they bought it”, Wiseman explained. “With these two issues the regulation is still lacking teeth. We need regulation on a global level, where these really bad abuses of surveillance technology happen. As long as there are governments which have an aim to control information, there will be private companies ready to supply this kind of technology.”

In the case of Hungary, Panyi reminded the audience that it should not just be the responsibility of journalists to call out illegal actions of oppressive governments and hold authorities accountable. “We need more support from Hungarian society and the international community”, he said.