“Democracy in darkness”: Uganda’s journalists under pressure amid pivotal election

Millions of Ugandans went to the polls on Thursday to vote for president in an election which gained exceptional worldwide attention as singer Bobi Wine, 38, challenged the incumbent Yoweri Museveni, 76. But the vote has been overshadowed by unprecedented efforts to block public access to information. Just hours before the polls opened the administration of President Museveni cut off access to the entire internet. Days earlier the authorities had banned Facebook and other social media platforms due to those companies’ ”arrogant” behavior.

For local media, the run-up to the election had become a “nightmare”, Peter Mwesige from the Uganda-based African Centre for Media Excellence (ACME) told the International Press Institute (IPI). On election day news could only be published via radio or TV. Reporters were limited to verifying information via phone, as e-mails and other online platforms were not available. ”It is a little bit of a mess. We don’t know what is true when we don’t have access to all the information”, Mwesige said on Thursday. He emphasized the role of journalists in terms of democracy, saying that the internet lockdown had seriously impacted the ability of media organizations and journalists covering the election. ”Now democracy is in darkness. There is no democracy.”

Speaking to IPI yesterday at noon, just few hours before polls closed, Uganda-based journalist Liam Taylor said that reporting was nearly unfeasible. Journalists were using their devices for photographing or recording videos even though they could not send them to their offices. It was unclear for how long the internet lockdown would last. “The situation against journalists is hostile”, he said.

Over 100 attacks on journalists

The internet shutdown was the culmination of a period of pressure on the free flow of information leading up to the election. Local media watchdogs have registered over 100 attacks on journalists in Uganda since November, when the candidates for the election were nominated. In particular, reporters covering opposition candidates have been harassed, arrested, beaten and even shot at by local police. In some cases, their equipment has been destroyed as well. One of the victims was freelance journalist Moses Bwayo, who suffered serious injuries from rubber bullets while covering a story relating to the National Unity Platform on November 5.

Since then, the attitude of authorities towards journalists has got even more intense, Taylor said.

Last week, less than a week before the election, the country’s inspector general of police, Martin Okoth Ochola, warned journalists that the police would not hesitate to beat them if they disobey orders.

Mwesige described the authorities’ attitude toward journalists as ”absolutely crazy”.

“We also have this pandemic and journalists are trying to keep distance to keep themselves safe, but at the same time they are being attacked”, he said.

Still, on election day the requirements for journalists to be allowed to cover the election were uncertain. On Sunday it was reported that journalists would not need to re-register to be able to access the polling stations. Taylor told IPI that the situation was still not quite clear. But there remained a possibility that journalists without required documents could be arrested.

During the 20-minute call with Taylor the line kept cracking. It was often difficult to hear what he said. At one point there was a loud noise in the background.

“It’s a helicopter. There is a helicopter flying above me, which tells you about the military precense here”, Taylor said. It was around 1 pm in Kampala. Taylor said the situation in the capital remained calm. People were queing at the polls.

There are around 18 million registered voters in Uganda which means almost the half of Uganda’s population was eligible to cast a ballot. This time, young people in particular were expected to make their voice heard. Many young voters appeared to favor the singer and current MP Robert Kyagulanyi, commonly known as Bobi Wine. He, along with nine other candidates, is trying to oust the incumbent, Museveni, who has been in power for 35 years.

The announcement of the results was expected Saturday. And whatever the result is, large demonstrations are expected. 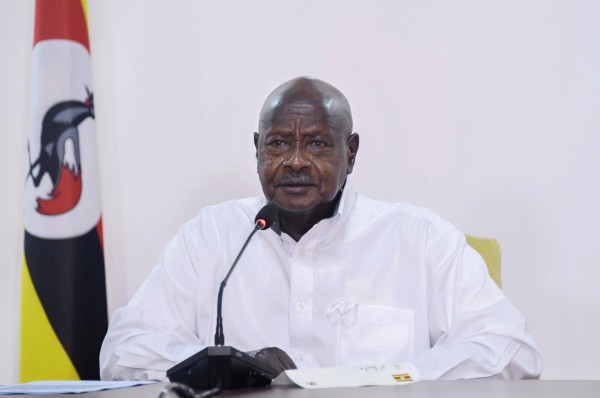