In interviews with IPI, journalists describe environment of fear and uncertainty under Taliban rule, with female journalists at particular risk

After the Taliban’s takeover of Afghanistan, the radical Islamist organization promised that journalists could operate freely under the new government. Now, proof that the Taliban is betraying that commitment is quickly adding up, Afghan journalists told IPI. “The situation for journalists is getting worse everyday.”

On September 7, Taqi Daryabi and Nemat Naqdi, two journalists from the Kabul-based media outlet Etilaat-e Roz were attacked after covering a women’s rights protest in Kabul. Photos of their severely wounded, bruised backs circulated on social media – a horrifying visual reminder of the Taliban’s true attitude toward independent journalism.

IPI spoke to several journalists in Afghanistan who portrayed a rapidly worsening situation for the press. Indeed, despite the Taliban’s initial promises to ensure press freedom in its new government, recent events indicate what many already assumed: it was a hollow promise to begin with. In the weeks following the Taliban’s takeover, Afghan journalists have been impeded from doing their work, harassed, threatened and attacked.

Even since the beginning of August, when the Taliban’s major takeover offensive began, attacks on journalists have increased. On August 9, the day after the Taliban seized Kabul, Radio Roshani, a women’s station in the northern Kunduz province, was destroyed by the Taliban. “That day, a group of men came to our office and told women not to come here anymore”, Sediqa Shirzai, the head of the station, told IPI. “The Taliban broke the microphones of our studio, so that we could not work anymore.”

It wasn’t the first time the Taliban had attacked Radio Roshani. In 2015, Taliban members set the station on fire. In 2016 the group planted mines around the office, but Radio Roshani continued airing.

This time, however, the situation is different. Shirzai fears for her overall safety – and that of her colleagues. Radio Roshani has stopped broadcasting. “I have never been as scared as I have been now”, she told IPI via WhatsApp. She added that a spoken interview was too dangerous as long as she is in Afghanistan.

Women journalists have especially suffered from the Islamist group’s takeover. Media reported that on September 2, only 39 female journalists were still working in Kabul despite the Taliban’s assurance its new government would ensure women’s rights – a reflection of the fear of what the Taliban’s rule means for women. Beheshta Arghand, a female anchor at TOLO made history by interviewing a senior Taliban representative on air, but fled the country two weeks later for her safety. “Like millions, I’m fearing the Taliban”, she told CNN.

But tThe evidence that the Taliban is betraying its commitment with regards to the Afghan media in general is quickly adding up. During protests in Kabul on September 7 and 8, Taliban policemen arrested more than 14 media workers covering the anti-Pakistan and women’s protests. TOLO News photographer Waheed Ahmadi was handcuffed, detained at the Taliban’s military headquarters, where he was held for three hours.  TOLO, Afghan’s biggest private television network, has exchanged Turkish soap operas with other programmes, due to the Taliban’s oppressive social and moral norms, a sign of growing self-censorship.

“Unfortunately, the situation is getting worse and worse”, Sharif Hasanyar told IPI. He is the head of Ariana News TV, which is one of Afghanistan’s biggest news channels. “Last week, during a women-organized protest in Kabul, journalists – including from Ariana News – were beaten by the Taliban and were held for hours.”. The repression has resulted in self-censorship among Afghan journalists, he explained. “Those who are working for the freedom of expression, who used to be the voice of the people of Afghanistan, feel under pressure to censor themselves.”

Fear for the media

Ahmad Quraishi, executive director of the Afghanistan Journalists’ Center, told IPI he feared there is no place for the press under Taliban rule. “The Taliban is afraid that the free media will undermine their newly established government, since a well-functioning media sector could show the world Afghanistan’s new situation”, he stated. “When there is free press, the people may have the ability to raise their voice and ask for their rights. The Taliban would not tolerate that at the moment”, he explained. “The Taliban sees the media as a tool to have people express their voice inside and outside of the country. By having people speak out, the media underline the values of free speech. These are however not the values the Taliban believes in.”

Already in May 2021, Quraishi expressed his worries about the future for Afghan media after the withdrawal of foreign troops. Quraishi told IPI at the time: “They [the Taliban] may not directly attack journalists or the media outlets, but there will be more restrictions on information.”

Now, the threat to journalists has gone beyond Quraishi’s fears. “Last week, the Taliban banned demonstrations without their official approval. But when people  are not even allowed to attend a peaceful demonstration of the people, how can journalists ever cover it?”

At this point, around 80 percent of the media outlets in the country have been closed or do not operate regularly anymore, Quraishi estimated. The remaining 20 percent are struggling to survive financially. Advertisement has almost fully stopped since the Taliban took power, Quraishi explained. “We cannot pay our employees this way, nor can we pay for electricity.”

Homaira Mohammadi, the head of Naway-e-Zan Radio, a women’s radio station in Farah province, described her economic conditions as “very hard”. “I spent all my money on this medium, but I have no supporters anymore, since restrictions imposed by the Taliban do not allow women in the media. The Taliban say we are not allowed to work in the media until we have prepared the conditions for women. I do not intend to stop my work, but we need financial support, otherwise I have to stop working.”

Afghan journalists are unsure if a future under Taliban rule will allow the same press freedom the media enjoyed in the past twenty years. “Perhaps if international advocacy succeeds, more pressure can be put on the future Afghan government”, Quraishi believed. “But we have to see if the Taliban government will amend current media laws. We have the constitution that ensures press freedom, and there is the Mass Media Law and the Access to Information Law. We have to see if these laws stay in place.”

As a female journalist, Sediqa Shirzai feels it’s already too dangerous to wait and see what the future brings. She has put down her work and is now waiting to escape the country.

Meanwhile, Hasanyar’s Ariana TV continues airing for now. “We are continuing our work, but we are facing lots of dangers. We are struggling, but we want to keep going for the people of Afghanistan.” But he is not without fear. “This month is worse than last month, this week is worse than last week, and today is worse than yesterday. It can change any second.” 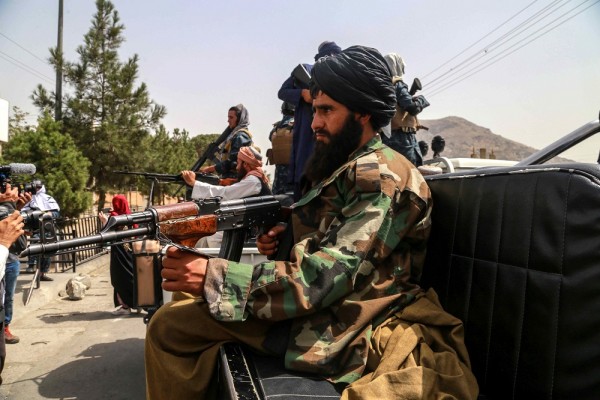