Over the last two nights, IPI documented at least 11 different incidents involving physical attacks, beatings, threats to journalists’ safety or destruction of equipment of reporters documenting the anti-government demonstrations, by both police and protesters.

At least six journalists have been injured, with one journalist from the Beta News Agency spending the night in hospital after being beaten to the ground with batons by riot police despite clearly showing his journalist ID.

While the majority of incidents occurred in the capital Belgrade, violence against media spread to other cities last night as several TV crews and reporters were attacked in Novi Sad and Niš.

“During these protests we have seen an unacceptable number of incidents where journalists and camera operators clearly identifiable as members of the media have been deliberately targeted by both protesters and the police”, IPI Deputy Director Scott Griffen said.

“The blatant destruction of property, disruption of live reports and violence towards journalists that we have seen in the last two days puts journalist safety at risk and seriously hampers the rights of citizens to stay informed. We urge both protesters and authorities in Serbia to ensure journalists, cameramen and other media workers are able to work without fear of threats and violence as they cover ongoing events.”

On July 7, peaceful protests held outside the Serbian National Assembly in the capital Belgrade later turned violent, leading to clashes with riot police using tear gas and numerous incidents against media reporting live from the scene.

That night, a cameraman from the Tanjug news agency was grabbed and then punched in the stomach by a protester, according to a report by the outlet. Separate video footage shows another Tanjug cameraman being intimidated and aggressively told to stop filming.

In another incident, plain clothes officers pushed and obstructed a crew from N1 TV recording police beating a protester in a park in central Belgrade. N1 reporter Jelena Zorić was also teargassed as she reported live that night.

Nova.rs news reporter Milica Božinović told IPI she was inappropriately hit with a police truncheon by a riot police officer. The incident, which was live streamed on the outlet’s Facebook channel, shows her repeatedly identify herself as a journalist before being hit by one of the officers. 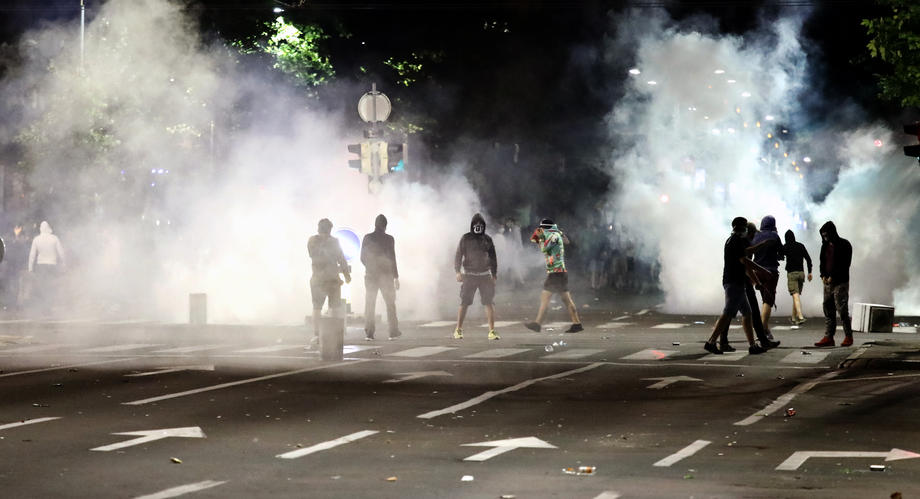 The next night, police attacked Beta News Agency journalist Žikica Stevanović and beat him to the ground with batons after he had been reporting on the latest clashes in Belgrade. Dragan Janjić, editor in chief of Beta, told IPI the journalist had been treated for cuts to his head and eye and had remained in hospital overnight. He added that Stevanović had been with two cameraman and continued to be hit after he presented his press ID to the officer. Two cameramen, Luka Pređa and Relja Pekić, were also slightly injured.

That same night Nova.rs journalist Marko Radonjić was repeatedly hit with a baton by police as he documented the clashes in the city centre, according to his employer. Radonjić said he was attached despite identifying himself as a journalist. Later that night he was also verbally attacked with threats of arrest as he documented an arrest.

In a separate incident, Nova.rs journalists Milica Bozinovic was attacked by riot police officers for the second time in two nights while reporting on the protest alongside colleague Natasa Latkovic. According to a report by Nova.rs, the police pushed Božinović and then hit her twice on the fingers with a truncheon, knocking the phone out of her hand.

Outside the capital, a crew from Serbian Radio and Television (RTS) in Novi Sad were attacked while reporting on the protests which had broken out in the city’s central square. RTS cameraman Lazar Vukadinović’s hand was injured during the incident and the crew’s camera was destroyed. The broadcaster’s offices were also damaged after a group of protesters surrounded the entrance and smashed the glass of its front door.

Another RTS crew was attacked by protesters in the city of Niš that same evening when a group surrounded a journalist and cameraman, insulted them and damaged the microphone and camera’s cables. An employee at the broadcaster confirmed to IPI that the cameraman was also hit on the head with a bottle thrown by protesters but not badly injured. Protests were also briefly held outside the RTS headquarters in Belgrade on Tuesday night before being broken up by riot police, according to local media.

The Association of Journalists of Serbia (UNS) called on authorities to find those responsible and urged both police and citizens to stand up for the protection of journalists.

The Independent Journalists Association of Serbia (IJAS) also denounced the violence, saying: “It is inadmissible for journalists to suffer physical violence, attacks and destruction of equipment.”

IJAS president Zeljko Bodrozic previously called on police to pay special attention to the protection of media crews and urged colleagues to wear press cards and avoid situations that could endanger their safety.

The SafeJournalists Network, a regional monitoring body for press freedom, echoed the call from IJAS and said each attack on journalists is an attack on public interest, democracy and rights of all citizens.

The protests stem from a decision by the Serbian government to re-impose a weekend curfew because of a rise in coronavirus infections despite previously holding recent presidential elections without special measures.

During the recent election, IPI also documented a number of threats and attacks on journalists.