An OMV Petrol Ofisi gas station, with the Ottoman-era Dolmabahce mosque in the background, is pictured in Istanbul on Feb. 3, 2016. REUTERS/Murad Sezer

The International Press Institute (IPI) said today it was concerned that criminal charges brought against Aydın Doğan, a leading publisher and businessman in Turkey, could be a further attempt to silence the Doğan media group.

The indictment, which was made public on March 17, accuses Doğan and Özince of organised criminal activity between 2001 and 2007, when their companies were stakeholders in Turkish fuel distributor Petrol Ofisi, which is now owned by the Austrian oil and gas company OMV.

In all, 47 top executives – including Doğan’s daughter, Doğan Holding Vice Chairwoman Hanzade Doğan Boyner, and other senior executives of Doğan Holding – are set to stand trial. The first hearing in the case is scheduled to be held in Istanbul on July 13.

The Istanbul chief prosecutor’s office is seeking jail terms of up to 24-and-a-half years for Doğan and Özince on charges of “establishing an organisation for the purpose of criminal activity”, forging official documents and violating Turkey’s anti-smuggling law.

The lawsuit accuses Doğan of not having paid import duties on oil imports. Ironically, however, no such import duties exist under Turkish law and did not exist during the time specified in the indictment.

IPI Director of Advocacy and Communications Steven M. Ellis said that the absurd nature and the timing of the accusations, coming amid an ongoing crackdown on any commentary that criticises or reflects poorly on Turkey’s government, gave cause for concern.

“Given the stream of invective from top Turkish officials against the Doğan group in recent years, including comments by President Recep Tayyip Erdoğan singling it out for its journalists’ reporting, and the fact that these accusations were already looked into last decade, we’re troubled that this case is proceeding,” he said. “The Turkish government has systematically worked to colonise the media with its supporters in order to eliminate any criticism or dissent. Silencing the Doğan group would be a major step in that effort, especially as the country addresses questions about the effectiveness of government efforts to fight terrorism and the wisdom of the president’s plans to centralise greater power in his office.”

The indictment is the result of an investigation launched in 2008 following a tip-off by a secret informant that was accompanied by a wide-scale campaign by pro-government media to discredit Aydın Doğan and Doğan Holding, the parent company of the Doğan Media Group.

Doğan Holding has categorically denied the accusations, first reported in newspapers close to the government, calling them “baseless” and “slanders”.

Tax authority as a weapon to silence media

In addition to the latest charges, Doğan Holding, which owns leading daily newspaper Hürriyet and television channels CNN Türk and Kanal D, has come under intense pressure over the years.

That pressure has come in the form of investigations, tax penalties, harassment and physical attacks against its reporters, columnists and headquarters, and repeated calls for the boycott of Doğan publications.

In 2009, Doğan Holding was slapped with an unprecedented $2.5 billion fine on charges of unpaid taxes. IPI has noted that the intent behind the tax investigation and subsequent fine – which was nearly the full value of the entire holding company – appeared to be “motivated by political and personal calculations” rather than any genuine desire to carry out a full and fair investigation into any tax irregularities.

This latest case against Doğan suggests that the Turkish government may once again be abusing its tax authority to silence independent media. 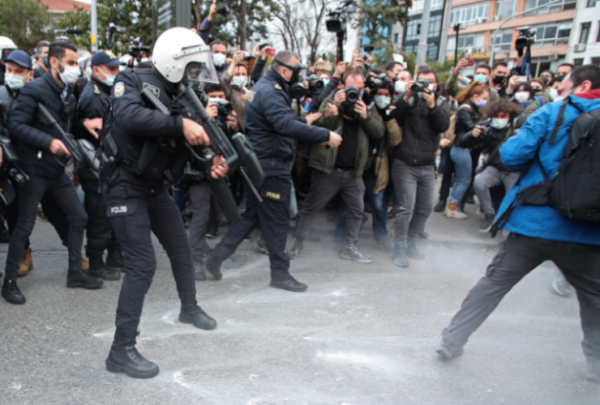