Criticizes teargassing of journalists protesting the attack on photojournalist

A demonstrator has his eye covered with a patch during a protest to show solidarity with Palestinian journalist Muath Amarna, who was shot in his eye, in Hebron in the Israeli-occupied West Bank November 18, 2019. REUTERS/Mussa Qawasma

The International Press Institute (IPI), a global network of editors, media executives and journalists for press freedom, today condemned a recent incident in which a Palestinian photographer was seriously injured in the eye by an apparent Israeli sniper as well as the teargassing by Israeli security forces of journalists protesting the incident.

On November 15, Moath Amarneh, a photographer for the Sanad news agency and GMedia company, was covering protests by Palestinian residents in the West Bank when he was hit in the left eye by shrapnel from a rubber bullet apparently fired by an Israeli sniper.

As the bullet hit a nearby surface and exploded, a two-centimetre-long fragment became embedded behind his eye close to his brain, requiring several hours of surgery to be removed. Amarneh was wearing a helmet and a vest clearly bearing the words “press” at the time when he was struck.

“Targeting civilians is unacceptable. Targeting a journalist with clearly marked press insignia is a deliberate attempt to hide the truth from the world”, IPI Executive Board Vice Chair Daoud Kuttab said

On Sunday, November 17, a group of Palestinian journalists organized a sit-in protest in solidarity with Amarneh in Bethlehem. Israeli forces used tear gas to disperse the crowd, leading to further displays of solidarity on social media from journalists wearing symbolic eye patches.

“All too often, Palestinian journalists are caught in the crossfire and injured because of the heavy-handed actions of Israeli security forces”, IPI Director of Advocacy Ravi R. Prasad said. “We call on Israeli authorities to investigate the matter and to also refrain from targeting journalists doing their job and speaking out against attacks on them.” 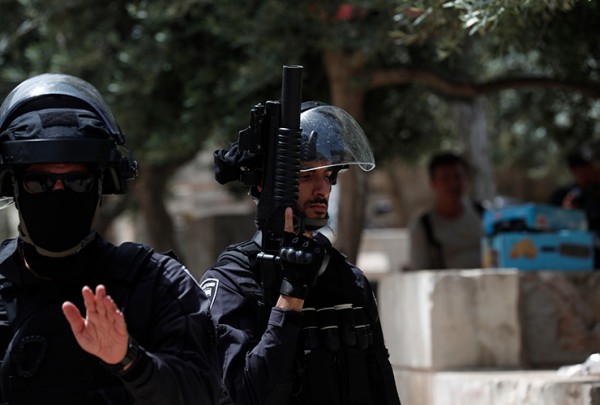