A woman walk pass next to Panama flags a day before the inauguration of the Panama Canal Expansion project, in Panama City, Panama on June 25, 2016. REUTERS/Carlos Jasso

Ornstein is currently facing a 20 month prison sentence for reporting on alleged corruption through his blog.

“Journalists must be allowed to do their jobs freely,” Cobus de Swardt, External Managing Director of Transparency International, said. “Corruption is by its nature secret. Journalists play an important role in showing that the corrupt cannot get away with their crimes. It’s no time to be incarcerating the messengers.”

IPI Executive Director Barbara Trionfi added that it was “appalling” that Panamanian authorities were seeking to imprison a journalist for exposing alleged corruption “just weeks before an important gathering of global anti-corruption experts and activists is set to take place there.”

She continued: “IPI’s extensive research on the use of criminal defamation laws around the world provides clear evidence that these laws often serve as convenient tools for prominent figures to quash critical media coverage, hide embarrassing or uncomfortable information, and silence investigations into financial, ethical and professional wrongdoing – all of which is extremely damaging and counter to the public interest.”

The charge of criminal defamation acts to deter journalists and leads to self- censorship, particularly on issues like fraud and corruption.

International bodies such as the OSCE, UNESCO and the U.N. Human Rights Committee have long expressed concerns over the use of criminal defamation laws to silence dissent. In many countries, these laws are subject to abuse by powerful actors – including government officials, civil servants or prominent businesspeople.

Prosecuting defamation under criminal rather than civil law leads to disproportionally harsh sanctions including hefty fines, suspensions on journalists’ ability to practice their profession, and in some cases, prison sentences.

“This case is a clear example of the abuse of criminal defamation laws to target those reporting on corruption and protect governments and powerful actors from accountability. Laws criminalising defamation must be repealed in order to protect the rights of journalists exposing this information,” Thomas Hughes, Executive Director of ARTICLE 19, said.

From Dec. 1 to 4, journalists from all over the world will come together in Panama City for the 17th International Anti-Corruption Conference, which will highlight the importance of investigative journalism in the fight against corruption and present awards to journalists whose work has exposed corruption.

ARTICLE 19 is a London-based human rights organisation defending the rights to freedom of expression and freedom of information through our offices around the world.

IPI is a global network of editors, journalists and media executives formed to defend media freedom and the free flow of news. IPI’s research into the effects of defamation laws on journalism is available here.

Transparency International is the global anti-corruption movement with more than 100 chapters around the world.

*This statement was corrected on Nov. 28, 2016 to note that Ornstein has been convicted. 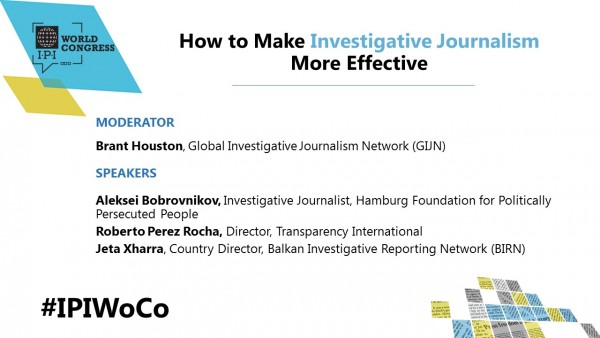 #IPIWoco: How to make investigative journalism more effective and enduring