Helsingin Sanomat, Finland’s leading daily newspaper, started to publish a series of articles beginning on December 16, 2017, on plans – which required a constitutional amendment – to give Finland’s security services greater powers to carry out surveillance and covert operations domestically and abroad. The articles shed light in particular on the operations of the Finnish Defence Intelligence Agency (VKoeL).

Following publication of the story, authorities opened an investigation into the newspaper for allegedly divulging “state secrets”. Five Helsingin Sanomat employees were named as suspects in the investigation, including Editor-in-Chief Kaius Niemi. On December 17, 2017, police raided the apartment of journalist Laura Halminen, seizing her computer as well as flash drives.

Today, on October 29, 2021, nearly four years after the publication of the story, prosecutors announced charges for disclosure and attempted disclosure of state secrets against Halminen and journalist Tuomo Pietiläinen as well as Kalle Silfverberg, who was head of Helsingin Sanomat’s political news department at the time. Niemi as well as managing editor Esa Mäkinen were not charged. The three charged journalists face four months to four years in prison.

Helsingin Sanomat has said that the articles did not contain any state secrets and emphasized that all information that was published in the story was available in public sources. It has also underscored that the story was in the public interest. Finnish news reports said that investigators previously determined that the newspaper had not acquired the information illegally. Authorities opened a separate investigation into the source of the leak.

“IPI is deeply alarmed by today’s decision, which poses a serious threat to the ability of journalists in Finland to work freely”, Trionfi said. “It is unacceptable and absurd that journalists in a European democracy like Finland are facing imprisonment for doing their job and reporting on an issue of massive public interest, which the discussion about the activities and powers of Finland’s security agencies undoubtedly was.

“This investigation itself – which has dragged on for years – had already cast a shadow over Finnish reporting on national security issues. These charges will now worsen this chilling effect, jeoparadizing the public’s right to be informed on issues of tremendous importance to society. IPI calls on Finnish authorities to swiftly drop all charges against the journalists in this case, and offer reassurance that upholding press freedom remains a priority in Finland.”

Khadija Patel, the chair of IPI’s global Executive Board, also criticized the move by prosecutors.

“This case undermines Finland’s reputation as a global safe haven for press freedom. At a moment in which governments around the world are ramping up pressure on independent media, to see a country like Finland take steps to punish journalists for public-interest reporting is disturbing and disheartening. Unfortunately, cases like this can inadvertently give cover to authoritarian states, and they undermine the ability of Finland and other democratic countries to defend independent journalism across the globe.”

Helsingin Sanomat has gained widespread recognition as a leading voice in the defence of independent journalism. During the 2018 summit in Helsinki between former U.S. President Donald Trump and Russian President Vladimir Putin, the newspaper published ads across the city with messages in support of press freedom. It has also launched initiatives to support media working in restricted environments, such as the Hungarian online news website Telex. 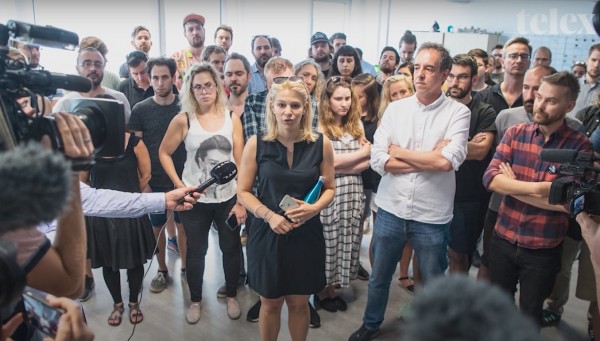