A Trump supporter wielding an axe handle alongside other far right groups battle Capitol Police officers in a cloud of tear gas on the eastern side of the United States Capitol building; January 6, 2021. Photo: Chris Jones/100 Days in Appalachia

On Jan. 27 at 5 p.m. U.S. EST, the International Press Institute and the IPI North American Committee hosted a Town Hall web meeting to highlight the rising threat of violence directed at reporters in the U.S. and discuss the best way to forge an alliance to share resources and experience that might help newsrooms to work safely in the field.

This wasn’t a safety training, but a wider discussion on what feels like a turning point in how journalists do their work in the United States.

Ten takeaways from the meeting on journalists’ safety

Event hosted by IPI & IPI NAC in partnership with: 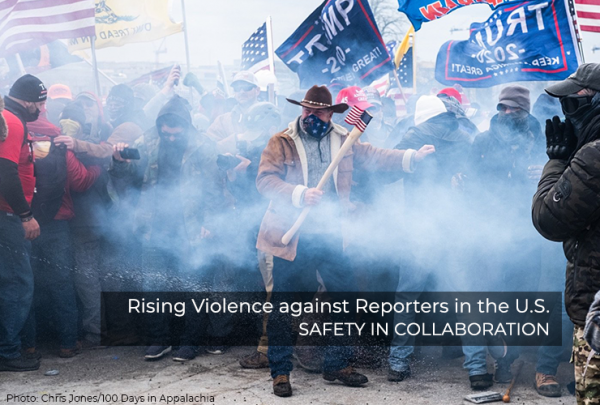 Rising Violence against Reporters in the U.S.