12 July marks 1,000 days since the assassination of Maltese investigative journalist Daphne Caruana Galizia. On this anniversary, we, the undersigned organisations, once again demand justice for all those involved in her murder and the corruption she exposed.

In recent weeks, yet more disturbing revelations of state corruption and impunity related to the case continue to emerge, underscoring the weaknesses in Malta’s rule of law, and entrenched impunity for both the murder of Caruana Galizia and the high-level abuses of power she investigated.

During a June 2020 hearing to compile evidence against murder suspect, Yorgen Fenech, the Magistrate ordered the police to investigate former Police Commissioner, Lawrence Cutajar for tipping off middleman, Melvin Theuma. Providing evidence in court, Theuma said Cutajar had informed him that he was under investigation both for the murder of Caruana Galizia and money laundering.

Former Deputy Commissioner and lead investigator, Silvio Valletta is also under investigation for his dealings with Yorgen Fenech, after he fell under suspicion.

At the public inquiry on 1 July, it emerged that the police had failed to take any action against Keith Schembri, in his previous capacity as Chief of Staff for former Prime Minister, Joseph Muscat, and former Energy Minister, Konrad Mizzi after Carauna Galizia revealed they owned offshore Panama companies in 2016. Responding to the testimony of Assistant Commissioner, Ian Abdilla, who has recently been replaced as head of the Economic Crimes Unit, the board of inquiry expressed disbelief that the police had done “absolutely nothing” with regards to the Panama Papers.

On 7 July, sources confirmed that Attorney General, Peter Grech, as the chief prosecutor, sent a note to police in 2016 advising them against investigating the Panama Papers, stressing that such an investigation would be “highly intrusive.” Such direct and unambiguous instructions from the Attorney General to restrict the police investigation into the content of Caruana Galizia’s work violated the responsibility of his post and was a clear obstruction to the course of justice rendering his position as Attorney General untenable.

Had the corruption which Caruana Galizia exposed – including the Panama Papers – been fully investigated and prosecuted at the time, it could have reduced the risk and isolation that she faced as a journalist, including an orchestrated campaign of harassment and vilification by high-level political and business figures in Malta.

The appointment of a new head of Economic Crimes Unit, Alexandra Mamo, and the nomination of a new Police Commissioner, Angelo Gafà, present an opportunity for the Maltese authorities to commit to tackling long-standing failures to investigate and prosecute allegations of high-level corruption and to reform institutions. In addition, the 18 June Venice Commission opinion on the Maltese government’s rule of law reform proposals is a welcome sign that the Maltese Government recognises the need for fundamental reform.

Prime Minister, Robert Abela has stated that he expects police to investigate “all corners” of the assassination. Today, we reiterate our call that the Maltese authorities honour the legacy of Daphne Caruana Galizia and ensure that all of those implicated in her murder – from the hitmen to the masterminds – are brought to justice and the corruption she revealed is finally  prosecuted. The authorities should now establish Joint Investigation Teams with foreign police forces  tackling related issues, so that there can finally be an end to impunity in Malta, and full justice for Daphne.

This statement is part of the Media Freedom Rapid Response (MFRR), which tracks, monitors and responds to violations of press and media freedom in EU Member States and Candidate Countries. This project provides legal and practical support, public advocacy and information to protect journalists and media workers. 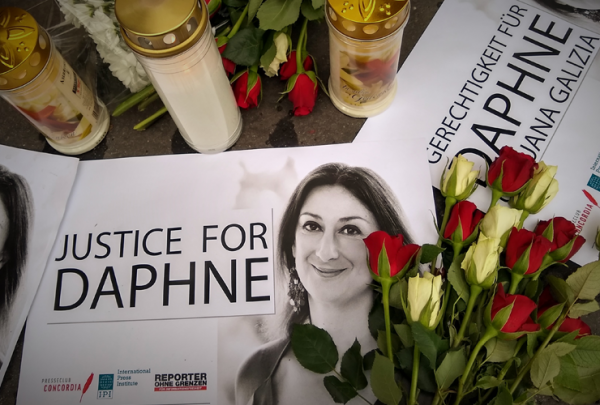 Appeal for Malta to request Europol assistance in Daphne investigation