Following the Brussels attacks, Belgian security forces requested the media and citizens not to report on the unfolding of an anti-terror operation due the possibility that the operation could be put at risk if terrorists had access to information potentially made public. This same circumstance had already occurred in Brussels after the Paris attacks, during a police operation in the centre of the Belgian city.

Media outlets and journalists often have access to delicate and confidential information that we generally handle responsibly. It is we who, in exceptional circumstances, make the decision not to publish something or to postpone publication for a few hours if we believe that doing so will not alter the news value and is in the greater good of society. This exercise of responsibility takes place on a constant, daily basis and forms an essential part of professional ethics. It is intrinsic to journalism.

For this reason, a media house does not need third-party tutelage, even if this occurs in an exceptional situation such as a terrorist attack or comes from state security forces, on how or when to report on a concrete incident. Yes, it is possible that a media house may act imprudently and thereby bring about undesired consequences. But the rule of law possesses the necessary mechanisms to respond to a media house or journalist after the fact if damage can be shown to have occurred due to bad practice or if a judge rules accordingly. Just like in any other field.

Over the past few years, taking cover in the societal disturbance produced by the unpredictability and randomness of these attacks and continually taking advantage of moments immediately after such attacks – when the emotional impact is highest – European governments have strained to communicate that we are facing a dilemma between security and liberty, one in which security always ends up coming out on top.

But this is a false dilemma. In democratic societies, the rule of law balances these rights a priori, from their very conception: The balance between security and fundamental rights is already legislated in national constitutions.

That’s why justifying situations of exception is so dangerous, particularly when it is done not by those who are pushing states of exception in the first place, but by citizens themselves, who, driven by fear, may end up normalising the undervaluing of certain rights, among them the right to information.

For a journalist, to unquestioningly accept and comply with police requests not to report entails abandoning the media’s watchdog function over the state. It entails presupposing that the authorities (in this case, state security forces) are going to act in accordance with the law. But what happens if, during such an operation, the rights of innocent citizens are violated? Or if the rights of guilty citizens are violated? And if such violations go unpunished? And if there is no one to report on them?

It can’t be the case that anything is permissible, even in exceptional circumstances. Guaranteeing fundamental rights is the responsibility of states and their representatives, i.e., governments and security forces, among others. And one of the duties of journalists is to watch over the fulfilment of these guarantees and report violations when they occur. For this reason, media houses and journalists should not adopt an uncritical manner toward the suggestion of news ‘blackouts’ if we do not want to renounce the very essence of our profession and our responsibility to society in its widest sense.

Virginia Pérez Alonso is the deputy editor of El Mundo, a member of IPI’s Executive Board and the president of the Madrid-based Platform for the Defence of Free Expression (PDLI). This article originally appeared in Spanish on March 29, 2016 on PDLI’s website, http://libertadinformacion.cc/. Views expressed in this article are those of the author and not necessarily of IPI as a whole. 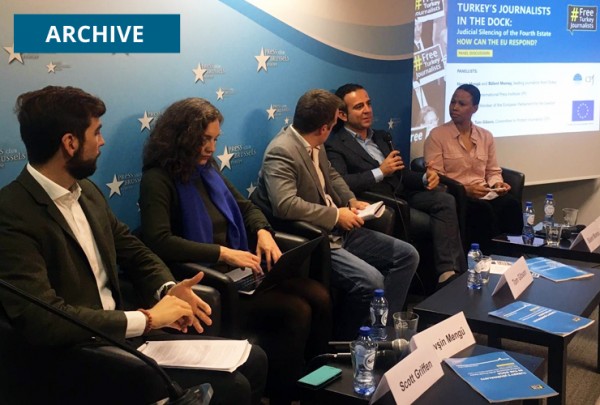