The International Press Institute (IPI) today joined the European Centre for Press and Media Freedom and the European Federation of Journalists in condemning the arson attack against James Cruickshank, the publisher of the Glasgow crime weekly The Digger.

As part of the Media Freedom Rapid Response (MFRR), the organisations also denounced attempts to intimidate stockists across the Scottish capital selling the publication and called on Police Scotland to bring those behind the attack to justice.

In the night between Saturday 31 October and Sunday 1 November, unknown individuals set fire to a car owned by Cruickshank as it was parked outside the house he shares with his partner. While the fire spread to his neighbour’s car, no houses were affected and the blaze was soon put out by the fire service.

However, as reported by the Press Gazette, this was not an isolated incident. During the same night, individuals visited approximately ‘30 of the 750 shops that stock The Digger in the Glasgow area to try to intimidate them to stop selling it’. According to the article, of those visited, two stopped selling the publication as a result.

It is strongly believed that the two incidents are connected to each other and to The Digger’s reporting on organised crime in Glasgow. There have been a number of attacks against crime reporters in Glasgow that demonstrate the need to ensure that all journalists are free to work without the threat of violence.

This was the second serious attack against The Digger. Two years ago, a delivery driver was ambushed by four hooded men armed with a baseball bat and a machete. Prior to this in 2015, Russell Finlay, who was formerly an investigative journalist for the Sunday Mail and Sun, was attacked with acid at his home by a known criminal disguised as a postman.

As demonstrated by the murders of Ján Kuciak in Slovakia and Daphne Caruana Galizia in Malta, as well as the smear campaign against Crime and Corruption Reporting Network (KRIK) in Serbia and the ongoing threats of violence directed against Patricia Devlin in Northern Ireland, to name but a few, across Europe, reporting on organised crime is one of the most dangerous forms of journalism.

However it is more needed than ever, with independent, impartial and robust reporting playing an important role in scrutinising and bringing to light the actions and impact of organised crime.

Many crime reporters depend on proactive and responsive policing, as well as an environment that values media freedom to ensure they are able to continue their important work. To protect journalists is to protect the rule of law.

The MFRR also condemns the threats directed at stockists of The Digger in Glasgow. They play no role in the editorial decisions of the publications they stock and should never face such intimidation.

As well as investigating the firebombing aimed at Mr Cruickshank, we call on Police Scotland to ensure the investigation extends to the intimidatory acts directed at these shops to ensure they can operate freely.

We also urge Police Scotland to ensure the investigation is swift, thorough and robust and ensures those behind these attacks are brought to justice.

This statement has been coordinated by the Media Freedom Rapid Response (MFRR), an Europe-wide mechanism, which tracks, monitors and responds to violations of press and media freedom in EU Member States and Candidate Countries. 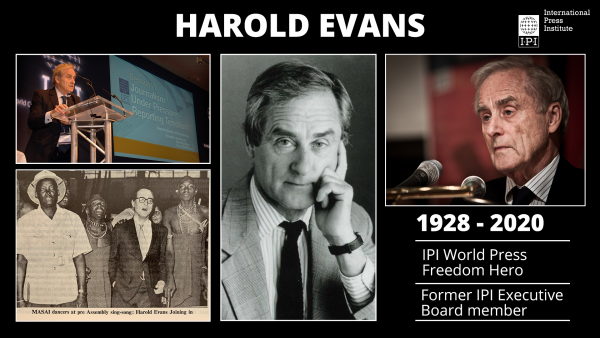 Harold Evans, former editor of The Sunday Times and Editor-at-Large of the Reuters, passed…
Read More