The International Press Institute (IPI) today joins other European media freedom and journalists’ rights organisations in expressing renewed concern about the lack of implementation of the recommendations of the milestone Public Inquiry into the assassination of Malta’s leading investigative journalist, Daphne Caruana Galizia.

On the first anniversary of the Public Inquiry report’s publication, we urge the Maltese authorities to comply with their international human rights obligations and implement the recommendations without further delay to ensure effective protection of journalists going forward.

Today marks the one-year anniversary of the publication of the landmark Public Inquiry report into the assassination of Daphne Caruana Galizia, which was found to be both predictable and preventable. The Inquiry found, “[T]he State should bear the responsibility for the assassination by creating a climate of impunity, generated from the highest levels at the core of the administration … and spreading its tentacles to other entities such as regulatory institutions and the Police.” This, the Board found, led to the collapse of the rule of law; a failure to acknowledge the real and immediate risk to Daphne Caruana Galizia’s life; and a failure to take effective preventive measures to protect her.

In its report the Board of Inquiry made a number of key recommendations to restore the rule of law and avoid that an assassination like that of Daphne Caruana Galizia could ever happen again. The recommendations provided an historic opportunity for the Government of Malta to implement its international human rights obligations to create an enabling environment for journalism and to protect journalists.

The Daphne Caruana Galizia Foundation and Article 19 Europe have published a report on the Public Inquiry including an evaluation of the implementation of its recommendations. It finds that to date, with minor exceptions, the Government of Malta has failed to implement these recommendations and has rejected proposals to implement anti-corruption legislation. The changes introduced so far are token gestures, rather than the effective and systemic reforms urgently needed.

In particular, the Government has failed to implement the recommendation to introduce laws tackling financial crime and corruption. Notwithstanding the changes made to the appointment of the Attorney General and Police Commissioner as part of the recommendations of the Venice Commission, serious concerns prevail that the Malta Police and the Office of the Attorney General still fail to truly initiate investigations and carry out effective prosecutions on the trails of corruption leading to the murder of Daphne Caruana Galizia, as well as on related scandals that emerged post her death, alongside ongoing magisterial inquiries. 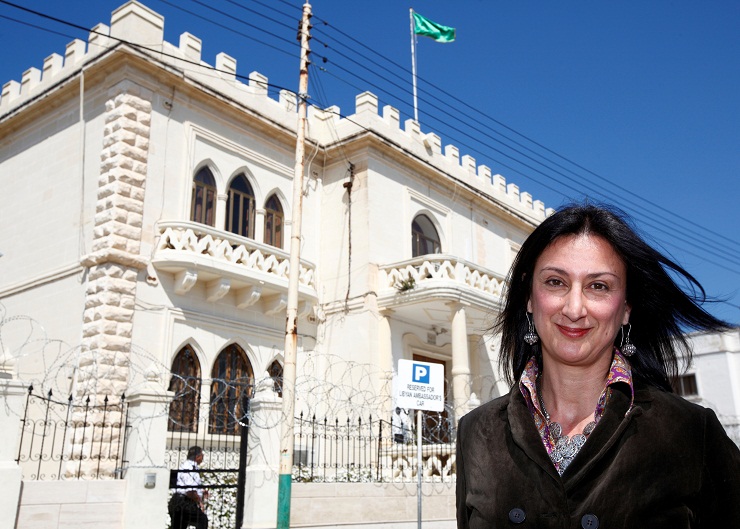 The persistent lack of political will to prosecute corruption revealed by journalists, including Daphne Caruana Galizia, has faced widespread and serious international criticism. The European Public Prosecutor (EPPO), the EU’s financial crime watchdog, Laura Kövesi, has questioned whether there is political will to tackle corruption commenting that, “Malta is paying lip service in its efforts to crack down on EU fraud and corruption.” Even where investigations have been initiated, the profound delays in prosecuting corruption, including in the Pilatus Bank scandal uncovered by Daphne Caruana Galizia in 2016, contribute to a context of impunity for corruption. The delay in implementing the Public Inquiry recommendations on anti-corruption are prejudicial to journalists who continue to report on the corruption which Daphne Caruana Galizia was killed for exposing and on other malfeasance and who remain at serious risk.

While some initiatives have been taken within the Maltese police force to establish a main contact point with journalists, much work remains to be done both in terms of training of the police on international standards as they relate to freedom of expression and in securing the trust of journalists. Offers of assistance in this regard from international media freedom organisations have gone unanswered.

A “Committee of Experts on Media” was announced on 11 January 2022 and tasked to provide Prime Minister Robert Abela with feedback on draft law reform proposals pertaining to freedom of expression and media freedom which the Prime Minister submitted to the Committee. The Terms of Reference for the Committee fail to require that the committee is independent, made up of individuals of demonstrable integrity and expertise, and that it should have cross-societal support. The lack of transparency and consultation with which the committee has operated since receiving its ToR poses a major concern to its legitimacy. The committee has not met with civil society, media or journalists nor Daphne Caruana Galizia’s family. It has also refused to participate in conferences relating to media freedom in Malta. While it is understood that the Prime Minister was presented with the Committee’s advice on his draft legislation and that the Committee is continuing its work, the process it has opted to follow lacks transparency.

The Government of Malta has put forward two draft legal proposals for the Committee to examine: one to “to amend the Constitution and various other laws to strengthen the right to freedom of expression and the right to privacy and to implement various measures for the protection of the media and of journalists”; and another “to provide for the establishment of structures for the protection of democratic society including the protection of journalists, other persons with a role in the media and in non-governmental organisations and persons in public life.” The OSCE Representative on Freedom of the Media and ARTICLE 19 have analysed the proposals for their compliance with Malta’s obligations under international human rights standards and have made important recommendations to strengthen the proposals including to ensure better protection of journalists, the right to information and comprehensive protection for journalists against SLAPPs.

One year on from the publication of the Public Inquiry report and almost five years since the assassination of Daphne Caruana Galizia, we once again urge the Government of Malta to live up to its international obligations and implement the recommendations of the Board’s report, along with those of the OSCE, the Venice and GRECO Commissions, and the Parliamentary Assembly of the Council of Europe, in a transparent manner without further delay and in full consultation with all stakeholders.

This statement was coordinated by the Media Freedom Rapid Response (MFRR), a Europe-wide mechanism which tracks, monitors and responds to violations of press and media freedom in EU Member States, Candidate Countries, and Ukraine. The project is co-funded by the European Commission.