People line up to buy Apple Daily’s final issue in Central, Hong Kong, China, 24 June 2021. The last edition of Apple Daily rolled off the presses three days earlier than expected, after management took into consideration the safety of its staff and manpower concerns. EPA-EFE/JEROME FAVRE

According to media reports,  four editors of now shuttered Apple Daily have been charged under the  National Security Law for conspiring with now jailed media tycoon  Jimmy Lai by colluding “with a foreign country or with external elements to endanger national security”.

Apple Daily’s former Executive Editor-in-Chief Lam Man-chung, Associate Publisher and Deputy Chief Editor Chan Pui-man and editorial writers Fung Wai-kong and Yeung Ching-kee, who were arrested yesterday, appeared in court this morning and were denied bail. While Lam was arrested for the first time, the others were detained earlier and had been out on bail. Yesterday their bail was cancelled, and they were taken into custody.

“Chinese government and Hong Kong authorities are creating a climate of fear by arresting and charging former Apple Daily editors and journalists much after publication was forced to close down”, IPI Deputy Director Scott Griffen said. “The international community cannot continue to ignore the trampling of human rights and fundamental freedoms of residents of Hong Kong.”

The law has severely impacted press freedom and created a chilling effect. Apple Daily and its publisher, Jimmy Lai, have been repeatedly targeted by Chinese and Hong Kong authorities for their pro-democracy stance.

Last year in August, a month after the national security law was implemented in July, the police raided the office of the newspaper and arrested several executives including Jimmy Lai. In April this year, a court found him guilty of organizing and participating in anti-government protests in 2019 and sentenced him to 12 months in prison. On May 28, Lai was sentenced to another 14 months in prison on charges of participating and organizing an illegal demonstration two years ago. Last month, Lai’s assets worth around 60 million euros and his shares in Next Media group, which publishes Apple Daily, were frozen by authorities.

A week later on June 24, Apple Daily was forced to close down, as its assets were seized and bank accounts frozen.

🎙️ #TodayInShort, we look into the impact of #China's National Security Law on the freedoms in #HongKong. This podcast w/ @javierluquem & @scott_f_griffen brings down to its essence the complexity of the issue.

➡️ Here you can find an extended analysis: https://t.co/DX3ZmMQlTj pic.twitter.com/78O0l0pXSu 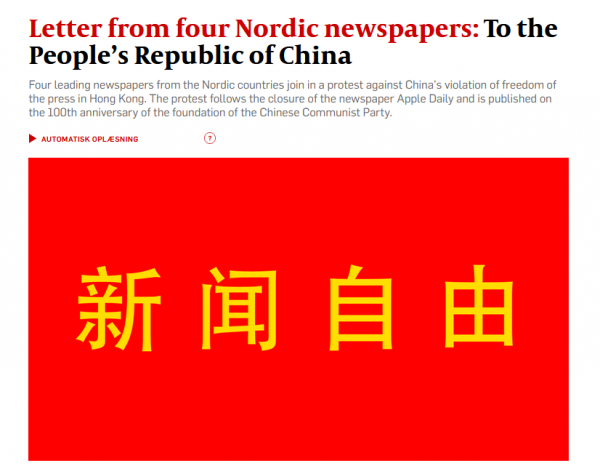