The International Press Institute (IPI) today joins its Czech National Committee and other journalist groups in the country in calling on MPs to urgently consider amendments which would provide sustainable financing for Czech Television and Czech Radio.

The statement was published on September 27 by IPI’s Czech National Committee in cooperation with the Independent Journalism Foundation (NFNZ) and the Syndicate of Journalists of the Czech Republic. Read the appeal in Czech here.

In recent months, IPI has led advocacy efforts by European media freedom organisations in pushing the new government of Prime Minister Petr Fiala to pass much needed amendments which will help strengthen the institutional and editorial independence of the broadcasters through principled changes to the system of election for the oversight boards.

Long-term sustainable financing is also vital for the proper functioning of both broadcasters. One of the best ways to counter disinformation is through support for well-funded and independent media which can act as fact-checkers and sources of reliable information. IPI therefore supports the call for the Chamber of Deputies to reconsider the proposed increase to licence fee in the Czech Republic, which is long overdue.

Statement by IPI’s Czech National Committee, the NFNZ and the Syndicate of Journalists of the Czech Republic

The Czech National Committee of the International Press Institute (CZ IPI), NFNZ – Foundation for Independent Journalism and the Syndicate of Journalists of the Czech Republic call on the Chamber of Deputies to urgently discuss the draft law on Czech Television and Czech Radio.

At a time when the whole country is caught up in a disinformation war with the Russian Federation and when the disinformation scene is gaining representatives in the legislature, it is necessary for the democratic parties to support the functioning of independent media.

It is necessary to reduce political influence on the Czech Television and the Czech Radio. It is therefore highly advisable to change the way media councils are elected so that at least both chambers of the Czech Parliament are involved. This legislative proposal has been pending in the Chamber of Deputies for many months. In the last parliamentary term, we could observe efforts to destabilise the Czech Television through some of its councillors.

Czech Television and Czech Radio are currently facing another attack directed against the sustainable financing of both institutions. The ANO group of deputies proposes that old-age and disabled pensioners no longer have to pay concession fees. This step would destabilize the public media more and more in the long term. Due to the demographic development, the number of old-age pensioners is increasing and will continue to increase.

Contemporary society is facing difficult challenges, whether it is the war in Ukraine, the energy crisis or the deepening existential difficulties into which more and more Czechs are falling. In these critical times, the existence of a strong independent media is crucial to maintaining democratic conditions. The recent local elections confirm trends that sociologists have been warning about for some time. A significant part of society is exposed to disinformation sources and is losing confidence in democratic institutions because of them and the worsening economic situation.

The CZ IPI, NFNZ and the Syndicate of Journalists of the Czech Republic therefore call on politicians of democratic political parties to reconsider the proposed increase in the licence fee. The last time Czech Television saw such a move was 14 years ago, and Czech Radio even earlier. At a time of record-high inflation, unaddressed underfunding threatens to weaken public service media even further. This at a time when the space given over to disinformation campaigns needs to be filled with high-quality and professionally produced information. 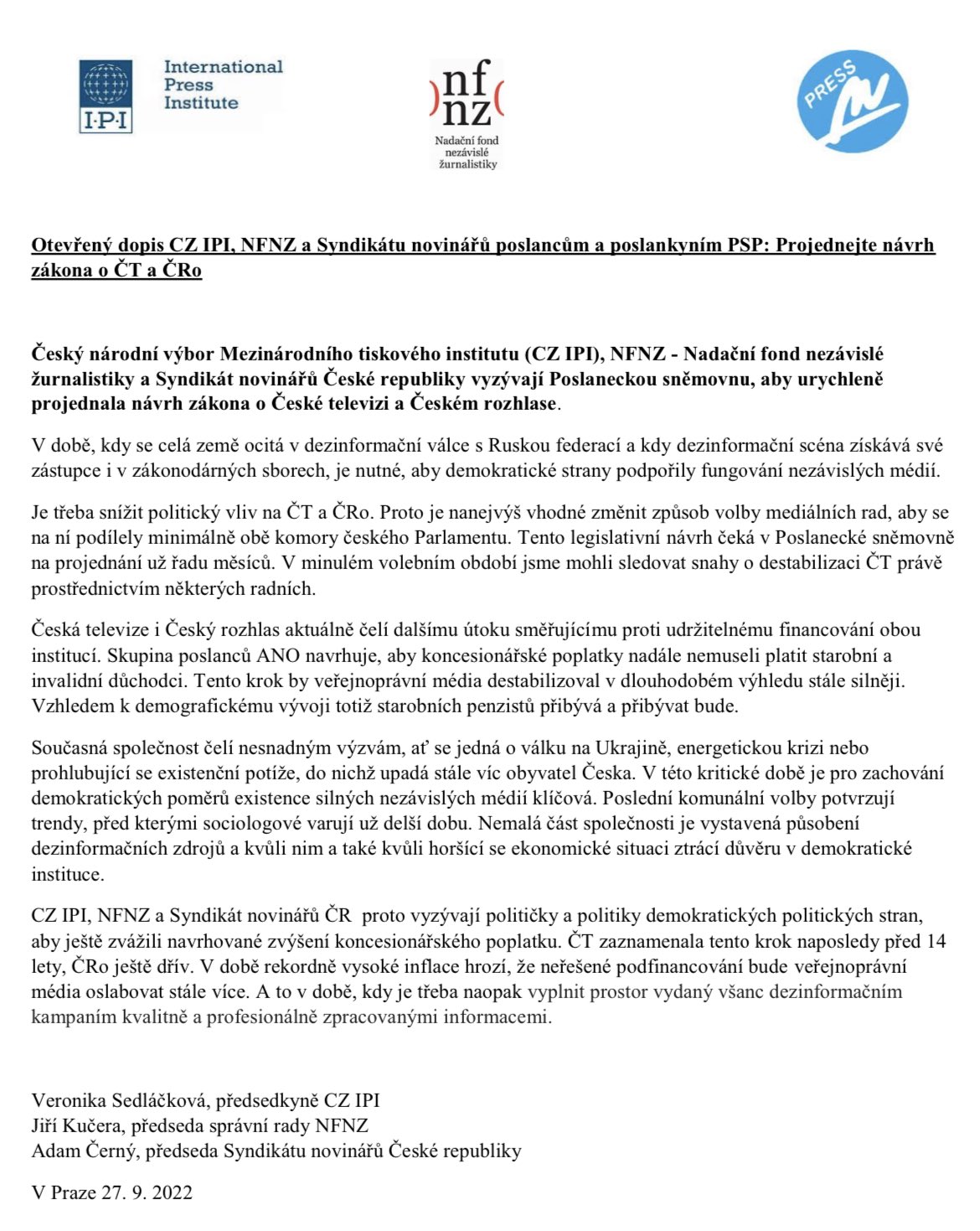