French photojournalist dies after being injured in Syria

Freelance war photographer Olivier Voisin died on Sunday in a Turkish hospital, days after he was wounded in the head and arm while covering the fighting near Idlib, in north-western Syria, according to reports. Voisin was hit by an exploding shell on Thursday, Feb. 21, the Paris-based Reporters Without Borders said, noting that Voisin had […]

Following a month of escalating violence in Syria, the International Press Institute (IPI) today condemned the failure of involved parties to stanch the deadly violence against journalists, which resulted in the deaths of yet another journalist and a citizen reporter today. “Once again, we reiterate that journalists and citizen reporters must be able to report […]

The International Press Institute (IPI) was saddened this week to learn of the deaths of four journalists killed while covering violent clashes near Daraa, Syria. Al Jazeera said yesterday that one of its correspondents, Mahran Al Deeri, died on Wednesday in the city of Sheikh Maskin. According to members of Al Deeri’s family quoted by […] 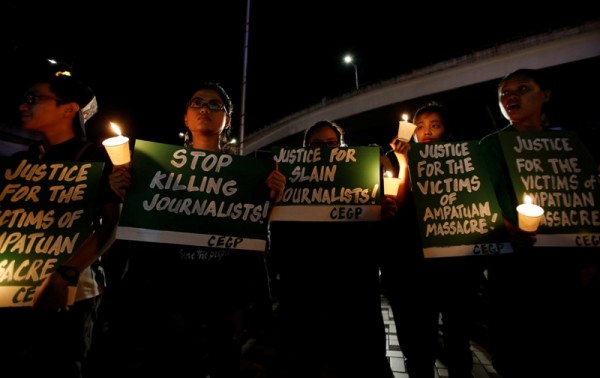 At least 100* journalists lost their lives in connection with their profession this year, the International Press Institute (IPI) said today, a drop from recent years but a tally that still made 2014 one of the most deadly on record. Some 89 of the names recorded on IPI’s Death Watch this year appeared to have been […]