Six months have passed since a coup d’état in Zimbabwe ended the 37-year rule of Robert Mugabe, who turned the southern African country into one of the most censored environments in the world. Although the seismic shift in the political situation raised hope for a new, more open era for the country’s media, little has changed over the past six months, Zimbabwean journalists and media experts say.

“We are still stuck with laws that restrict the media environment”, Nyakunu said.

Those laws, he explained, which include the Access to Information and Protection of Privacy Act (AIPPA), the Criminal Law (Codification and Reform) Act and the Broadcasting Services Act, “are no longer fit for purpose, but progress towards repealing them has not happened”.

Kholwani Nyathi, editor of the Zimbabwean weekly The Standard, also mentions “unfair” laws as a crippling factor for development in the media field.

“These laws promote self-censorship, as journalists are afraid to go after the powerful in society”, Nyathi said in an interview. “There is no guarantee that (journalists) will not be arrested if they write critical stories against them.”

For Nyathi, the last months have offered some sense of greater freedom for The Standard’s journalists, but the full potential of that freedom has yet to be reached due to the legislative environment.

“To an extent, journalists feel free to cover some issues that could have been difficult to spotlight against Mugabe, but the fact that prohibitive laws remain on the books means they have to censor themselves”, he commented.

Media freedom advocates have also sounded the alarm about new laws planned by the government, especially a pending measure on cyber-crime and cyber-security. In an analysis, MISA Zimbabwe noted that presidential spokesperson George Charamba said Zimbabwe had “looked to China, Korea, and Iran for insights on how to regulate local cyberspace”. Such comments are enough to set alarm bells ringing.

However, Zimbabwe’s minister of information recently indicated a willingness to meet with MISA Zimbabwe to talk about media legislation and policy reforms. Nyakuru sees this gesture as a positive step.

“We are more than ready to meet them and talk about the issues that need to be addressed”, he said.

For Nyathi, another big problem for media freedom in Zimbabwe is the entrenchment of military personnel in the government after Mugabe’s ouster.

“The generals who are now in government have in the past been hostile towards freedom of expression”, Nyathi remarked.

In November 2017, Mugabe’s ZANU PF party colleague Emmerson Mnangagwa took over as president. Mnangagwa has since promised fair elections, which are expected to take place in July or August this year.

Media freedom violations and assaults against journalists usually spike during election campaign periods, Nyakunu said. A period of calm between December 2017 and April 2018, during which time MISA Zimbabwe did not record a single assault against a journalist other than a few reported verbal threats, seems to have come to an end with news of detentions and assaults on journalists covering election-related topics. 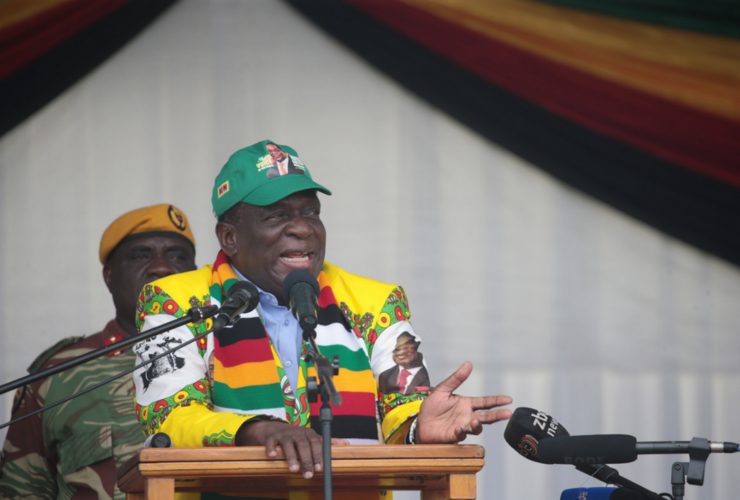 Zimbabwean President Emmerson Mnangagwa at a campaign rally in May 2018. EPA-EFE/AARON UFUMELI

The upcoming vote is posing challenges for journalists in other ways. Zimbabwe’s elections commission requires separate accreditation for journalists who want to cover the elections, something that MISA Zimbabwe opposes.

A related concern ahead of the poll is Zimbabwe’s highly polarized media sphere. Media coverage can be biased, Nyakunu said, with pro-government and pro-opposition papers rooting for their candidates and in the process sometimes forgetting the profession’s code of ethics. Therefore, MISA Zimbabwe is urging the government to make the necessary media law and policy reforms before the elections to cool down the situation. At the same time, the organization is reminding journalists of their responsibility to provide citizens with factual and fair coverage so that they can in turn make informed decisions in the elections.

The problem of bias is a particular concern with state-owned media, which followed the government’s line under Mugabe and have continued to do so after the change in power. MISA Zimbabwe is working hard to usher in a more pluralist media landscape, but again the key to the issue is the legislation.

“Obviously, the change hinges on the reforms that we’ve been pushing for”, Nyakunu said. “If the reforms are implemented, then that might result in an improvement in terms of how the public media operates.”

He added that, according to Zimbabwe’s constitution, all state-owned or public media outlets should be free to determine the editorial content of their broadcasts or their stories and be able to publish dissenting views and opinions, regardless of political or commercial interests.

“That is the ideal, and that is what we continue to push for”, Nyakunu said. “We want full enjoyment of the rights provided in the constitution of Zimbabwe.”

Despite the shortcomings in legal reform, Zimbabwe has seen several positive developments in its media landscape. The first independent fact-checking platform in the country, ZimFact, was launched in March 2018. ZimFact selects stories and information presented in Zimbabwean media and checks facts presented in them following strict guidelines. The site says its aim is to work toward a more impartial and fair media sphere in the country.

Nyakunu described the act as a sign that the media space was opening up for dissenting voices.

“We are happy to see that the message of collegial solidarity is taking root.”