People place candles and flowers on the Market Place in Turku, Finland, on August 19, 2017 following the fatal attack on the previous evening, where two people were killed and eight people injured in a stabbing spree. MARKKU OJALA / EPA.

Finnish journalist Linda Pelkonen can still remember the feeling of fear. “I thought these people were out of their minds and that they would come and find me,” she said, recounting a wave of online harassment against her in 2015 in a recent interview with the International Press Institute (IPI).

So Pelkonen could empathise strongly with Rebekka Härkönen, a reporter for the Turun Sanomat newspaper who was the target of vicious online abuse following her coverage of the August 19 knife attack that killed two people and wounded eight others in Turku, a medium-sized city in southwestern Finland. In the aftermath of the attack, Härkönen wrote a story that featured an Afghan man said to have aided one of the first victims, leading to an anti-immigrant backlash against her.

While the targeting of Härkönen made headlines in Finland, the issue of online harassment in the country is not new. A survey carried out in the spring of 2017 by the Finland Journalists Union (UJF, according to its Finnish acronym), the University of Tampere and the Finnish Association for Investigative Journalism (TJY) found that one in four journalists had been the victim of verbal harassment, such as insults and threats implying physical violence. Most of the incidents were triggered by articles on refugees, immigration and racism.

The survey results indicate that the level of online harassment of journalists is unprecedented, according to UJF President Hanne Aho. In an interview with IPI, Aho explained that although complete historical data are not available, in recent years the number of incidents originating from both far-right and anti-racist groups had increased.

Most of the journalists targeted are women, Aho noted. The UJF has worked to raise awareness on the harassment of female journalists in particular and, in fact, played a central role in bringing the online aggressors in Linda Pelkonen’s case to justice.

In 2015, Pelkonen wrote a story for the online news site Uusi Suomi on the rape of a 14-year-old girl in which a Finnish citizen of immigrant background was allegedly involved. In the article, Pelkonen highlighted that the police report on the incident had – unusually – identified the suspect’s ethnicity. This aspect of Pelkonen’s reporting led to an avalanche of rape and death threats on social media and email against her.

The attacks appeared to have been prompted by the publication of a post smearing Pelkonen on the anti-immigrant MV Lehti website, which is reportedly under investigation for a range of offences including defamation and copyright infringement.

Shortly thereafter, a reader published Pelkonen’s personal mobile phone number in the website’s comment section, and encouraged others to let the journalist hear their discontent. Other comments replied saying that they would harass Pelkonen with messages. 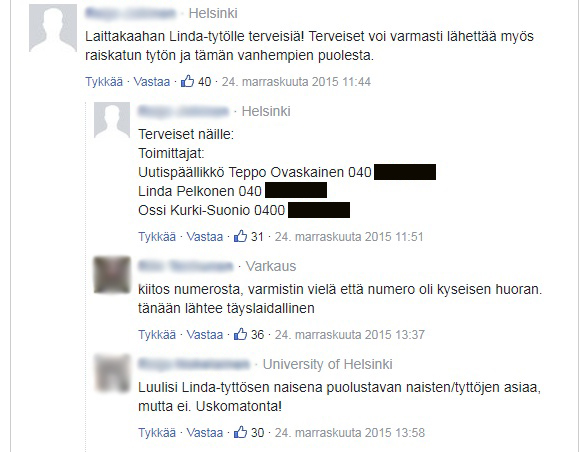 Screenshot taken from a discussion in the comment forum of MV Lehti on an article published by the website about Linda Pelkonen. One of the readers publicly posted Pelkonen’s phone number and encouraged others to send her text messages.

Following that posting, Pelkonen said she received threatening text messages from 18 different phone numbers, as well as a phone call in which the caller told her she would be raped.

“I went to the police station to report the threats, and told them that I was scared,” Pelkonen told IPI. However, a regional prosecutor declined to press charges on the basis that, due to the public nature of their work, journalists “need to be able to endure more criticism than others”.

The decision prompted the UJF, together with Pelkonen, to file a complaint with the prosecutor’s office arguing that a failure to investigate the threats would set a dangerous precedent. In response, Finland’s prosecutor general agreed to pursue the case.

Eventually, on May 31, 2017, the Helsinki regional prosecutor’s office charged three men over the attacks on Pelkonen, one for issuing a threat and two for defamation, according to the Helsingin Sanomat newspaper. Reports indicated that one of the men charged had called Pelkonen, one had sent her a text message and the third had written about her online.

Authorities in Finland appear to have learned from the experience of handling Pelkonen’s case. Police have already launched an investigation into the threats against Härkönen.

But media outlets, too, are taking steps to better protect their staff from the phenomenon of online harassment.

Three days after the attacks on Härkönen, the news editor at Turun Sanomat, Hannu Miettunen, gathered the newsroom staff together to underscore the paper’s commitment to their well-being.

“We told them to come to us if they are ever feel threatened online or by any other means” Miettunen explained to IPI. “It is important for them to understand that no one has to endure the emotional distress alone.”

Helsingin Sanomat Editor-in-Chief and IPI Board Member Kaius Niemi said that news editors in Finland had become aware of the dire consequences online harassment has on their journalists.

“It’s vital that the journalists themselves report this type of attack so that editors can act on it”, Niemi told IPI. “Although a lot still needs to be done, newsrooms in Finland are ready to provide psychological support and deploy an array of security measures in coordination with authorities to protect the journalists, both staff and freelancers.”

Despite this readiness, media representatives in Finland agree that the challenge of combating online harassment remains great.

Aho, of the UFJ, commented: “Although we have talked a lot about this issue over the last three years, I don’t think we have built enough standard mechanisms to tackle this.”

“Unfortunately, this phenomenon will not stop,” Niemi added. “The aggressors will refine their methodology and the attacks will become more sophisticated”.