Delegates from the International Press Institute (IPI) and the African Media Initiative (AMI) call on Zambian authorities to allow opposition daily The Post to reopen immediately, noting that the apparent politically motivated attempt to silence it ahead of elections is part of a chain of events raising deep concerns over the state of democracy in the country.

The delegates travelled to Lusaka from July 13 to 15, 2016 as part of a joint emergency press freedom mission in which they met with representatives from government, the leading opposition party, The Post, the judiciary, civil society and foreign diplomatic missions to discuss the June 21 closure of The Post’s offices and printing press, and the seizure of its assets, over disputed tax debts.

The groups note that an order by Zambia’s Revenue Appeals Tribunal last month set forth a path to resolve the matter, which centres on allegedly unpaid income tax withholding and VAT receipts. The order directs the Zambia Revenue Authority (ZRA) to release The Post’s bank accounts and hand back its premises and equipment so that it can conduct business. It also directs The Post to immediately pay whatever portion of a 53 million kwacha tax bill issued earlier this year that it believes is actually owed and to provide security for the remainder until the true amount can be determined.

The groups also note the arrest of Post Editor and Co-Founder Fred M’membe, his wife, Mutinta Mazoka-M’membe, and Post Deputy Managing Editor Joseph Mwenda after they entered the paper’s offices with the Tribunal’s order. The three, who were allegedly assaulted during the incident, were released but charged with uttering a forged document – the order – and criminal trespass.

The tax case against The Post is widely perceived to be the result of political pressure by Zambian President Edgar Lungu to silence critics of his ruling Patriotic Front (PF) party ahead of next month’s elections, in which voters will elect the president and members of the General Assembly, and decide whether to adopt changes to the Bill of Rights in Zambia’s Constitution. 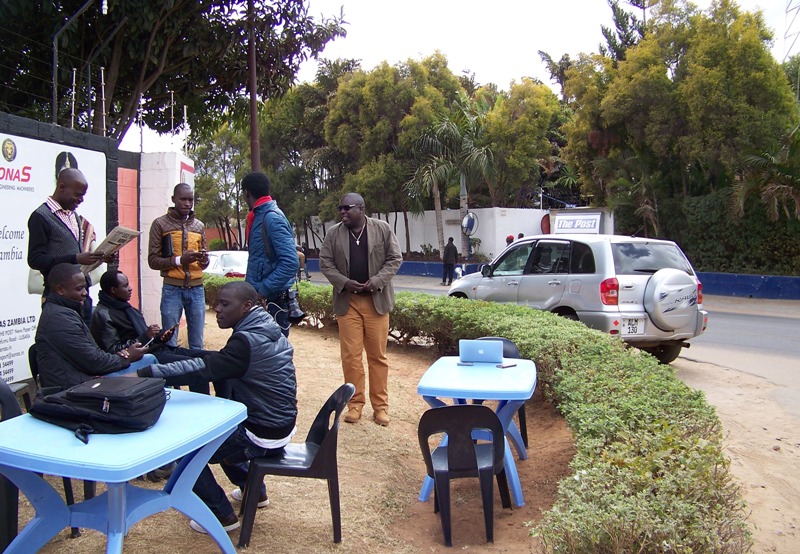 Journalists from Zambia’s The Post, working from their “mobile newsroom” on the street outside the publication’s shuttered offices on July 13, 2016. The newspaper has continued to publish a truncated print version since Zambia’s Revenue Authority seized its assets and closed its offices in June 2016. Photo: IPI

Zambia’s economy has suffered a downturn in recent years as a result of falling copper prices and other factors, making the collection of tax revenues that much more important. However a government spokesperson conceded that the ZRA has failed to act as aggressively to collect tax debts from media outlets sympathetic to the PF.

The representatives also note that government agents have raided printers suspected of printing copies of The Post in recent weeks, even though no court has deemed publication of the daily to be illegal. Government representatives have brushed off questions about one of those raids, claiming the printer was the target of unrelated charges, but they have failed to justify others.

The case targeting The Post has come amid an uptick in pressure on media, leading to a broader climate of self-censorship. The representatives note that in recent years journalists have complained of threats and harassment by Information Minister Chishimba Kambwili against journalists and outlets that engaged in critical, or insufficiently deferential, coverage.

Journalists have also reported harassment and threats from party cadres associated with both the PF and the opposition United Party for National Development (UPND), depending on the journalists’ media affiliation.

The tax case has also come amid an unprecedented surge in political violence, illustrated most recently in last week’s use by police in Lusaka of live ammunition to quell clashes with UPND supporters. One UNPD supporter was killed, leading the country’s election commission to order all campaigning in the capital city suspended for 10 days.

Zambia has enjoyed a reputation as a leader in respect for democracy and human rights in the region, but recent events have cast a troubling shadow over that reputation. Voters need and deserve to hear a full range of voices as they decide their future. The Post has played a vital role in providing an alternative to government dominated mass media. Unshackling that voice is critical if Zambians are to vote in an atmosphere that can be deemed free and fair. The sooner that this issue is resolved – and the sooner that The Post and all journalists who choose to play such a role are allowed to do so freely – the better.

The representatives therefore call on Zambia’s government to:

The representatives further call on the ZRA and The Post to heed the aforementioned decision by the Revenue Appeals Tribunal and to work together to ensure that it is carried out.

Zambian Supreme Court rules liquidation of The Post was illegal

On February 17, the Zambian Supreme Court ruled that the liquidation process of The Post n…
Read More