Citizens protest in the center of Thessaloniki, on 25 May 2011. EPA/SOTIRIS BARBAROUSIS

On the morning of Oct. 4, 2017, the one million residents of Thessaloniki, Greece, woke up in a city without a major local daily newspaper.

The night before, the storied newspaper Makedonia and its weekly edition, Thessaloniki, had closed down after a long, dark period of conflict between the paper’s staff and management over unpaid wages. Founded in 1911, Makedonia was the oldest daily news outlet in northern Greece.

In an unfortunate coincidence, just two years earlier, in October 2015, Aggelioforos, Thessaloniki’s highest-circulating paper, had printed its last issue and closed down for good. The move left 110 people out of work.

The dual closures have dramatically altered the media landscape of Thessaloniki, Greece’s second-largest city. Today, only a few local publications with very low circulations remain, in addition to a handful of free tabloids. These papers’ offices are understaffed and their remaining journalists have little time to act as watchdogs able to hold local politicians accountable.

The serious viability problems Makedonia was facing had been an open secret for a long time among Thessaloniki’s journalists.

“If I remember well, it must have been seven years ago when we were told that the circulation of the newspaper was very low and that advertisement revenues were not enough to keep it going,” Nikoletta Bouka, a journalist with the former Makedonia, recalled in a recent interview with the International Press Institute (IPI).

By the end of 2011, Makedonia’s journalists had gone five months without being paid. They decided to take advantage of a legal provision that allows employees to abstain from work until they receive money owed to them.

John P. Rigas, the U.S.-based owner of the newspaper, acquired a loan of 10 million euros and negotiated the journalists’ return to work. The feeling of hope was short-lived, however. The newspaper’s management fired close to half the staff and cut wages by 30 percent.

Even with the draconian cost-cuts, Makedonia’s financial problems continued. This past October, after 18 months without pay and with no clear commitment regarding the future of the newspaper, the remaining staff decided to put an end to what had become a vicious cycle. With the support of the Journalists’ Union of Macedonia & Thrace Daily Newspapers (ESIEMTH), they decided once again to abstain from work, an act that this time prompted Makedonia’s closure.

Over the last two years, and despite the lack of pay, Makedonia’s remaining journalists continued to cover local stories, shining a light on the activities of elected officials.

“Up until the last moment we were covering every story in the city,” Bouka said. “Sometimes we even borrowed money in order to be able to do so. Despite the difficulties, we kept our dignity and honesty and fought to provide our readers with valid and timely information.”

The management dispute left many in the staff upset with Rigas, who was seen as not having done enough to save the paper. His name would also surface in the Panama Papers and Paradise Papers investigations.

But Makedonia’s journalists also recognised the role that the newspaper market’s changing dynamics had played. For her part, Bouka also did not discount mistakes the paper’s journalists may have made.

“Perhaps, after a certain point, we [journalists] didn’t manage to stay close to our readers and attend to the needs of local society,” she said. “But most [readers] have stopped paying for newspapers. In doing so, people deprived themselves of the right to have a strong voice of representation.”

Whatever the reasons, the reality of the situation is sobering.

“It certainly feels like the end of local press,” Bouka reflected. “A city with one million citizens just didn’t manage to keep one of the most emblematic newspapers alive.” 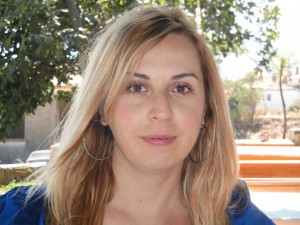 “Up until the last moment we were covering every story in the city” – Makedonia journalist Nikoletta Bouka.

Experts in Greece have sought to analyse the reasons behind the closure of formerly prominent local media such as Makedonia.

Christos Frangonikolopoulos, associate professor at the School of Journalism and Mass Communications at Aristotle University of Thessaloniki, explained in an interview that a combination of several factors has resulted in the demise of local dailies.

“Reading local newspapers used to be people’s daily habit all around Greece,” he commented. “Thousands of copies were sold on a daily basis and the local newspapers were particularly popular.”

That era, Frangonikolopoulos indicated, is over.

“There is no doubt that local newspapers with a business model based on revenue from advertisements and circulation have been hard-hit by the economic crisis,” he indicated.

However, he added, recent years have seen local dailies lose something even more valuable than money: readers’ trust.

“Some [local newspapers] tried to compete with national dailies, leaving their readers feeling detached and somehow betrayed. Also, as many researchers have suggested, a lot of readers turned away from their newspapers over concerns about business and political influence on content.”

But the solutions that Greek media have pursued in the face of this dual crisis have created problems of their own.

“The [papers] that survive today try to attract readers by creating websites or by offering magazines, CDs and books,” Frangonikolopoulos explained. “The expansion of television and the Internet forced the media to adapt to the new corporate principles of the digital era, where everything starts with a ‘click’ and is measured in viral stories rather than facts.”

In other words, media organisations did not respond creatively enough to the digital age so as to both embrace technology and maintain their watchdog role.

For Frangonikolopoulos, this development has chipped away at journalism’s role in creating a well-informed public and at the concept of news as a social good.

Coverage of local news dries up

In theory, local news in Thessaloniki could be covered by journalists working for national Greek newspapers. The reality, however, is much more complicated.

According to Yiannis Kotsifos, director of ESIEMTH, almost all national newspapers have closed down their local bureaus in Thessaloniki.

“In 2014, after 40 years, one of the biggest news organisations in Greece, Lambrakis Press Group (DOL), closed down its Thessaloniki bureau,” Kotsifos said. “Apart from a brand new office recently reopened by the newspaper Ethnos, there is no other organised bureau in the city.”

The lack of local news coverage in Thessaloniki, Kotsifos argued, not only threatens jobs and social rights within an already weakened profession, but also has consequences in terms of public information.

“The reality is that people in provincial regions in Greece face clear restrictions regarding the public good of access to information through the media” he said.

The same problem, he added, could be found throughout Europe, as a recent resolution of the European Federation of Journalists, an umbrella group to which ESIEMTH belongs, highlighted.

A time for change

“There is no doubt that our profession has been deeply wounded,” she said. “Hundreds of colleagues who have served journalism with loyalty, seeing it mostly as a vocation rather than a job, are unemployed and struggling to survive.”

But she added: “Times are changing, so perhaps it is time for us to change as well. Let’s raise our heads up and look for new ways to keep doing what we know best: to be the voice of the people.”