Cambodia media stifled ahead of elections

The collapse of press freedom began in Cambodia a little less than a year ago, as Prime Minister Hun Sen and his Cambodian People’s Party (CPP) took the first steps to secure their victory in the 2018 general election this Sunday.

Using tax laws and other legal instruments, the government has effectively silenced the country’s independent media, closing down newspapers and radio stations.

In August 2017, the independent newspaper Cambodia Daily was forced to close on the pretext of unpaid taxes of over $6 million. Soon after, several independent radio stations were taken off air, accused of violating their contracts with the government.

Press freedom was further jeopardized in May 2018, as the Phnom Penh Post, Cambodia’s last major independent newspaper, was sold to a Malaysian businessman linked to Hun Sen. After the paper published a story detailing these ties, its editor-in-chief was fired.

The government has also put pressure on journalists with legal actions. Two former reporters of the now-shuttered Cambodian branch of Radio Free Asia, Oun Chhin and Yeang Sothearin, were charged with treason and espionage. The pair has been behind bars awaiting trial since November 2017. Former Cambodia Daily journalist Aun Pheap fled the country in May in fear of arrest after being charged with incitement along with his colleague Zsombor Peter last year.

With less than one week before the general election on July 29, press freedom is very limited in Cambodia, Sek Sophal, communications officer at the Cambodian Center for Independent Media (CCIM), told the International Press Institute (IPI) in a recent interview.

“It might be an absolute argument if I say there is no press freedom in Cambodia, since some media institutions are still in operation”, Sek said. “But I would argue that there is very limited space for independent media since the coordinated crackdown last August.“

One of the radio services disrupted last year was CCIM’s Khmer-language Voice of Democracy. After the channel was forced off air, the newsroom has continued reporting on online platforms, such as Facebook, like several other closed media outlets.

“Facebook has become the only channel of choice for live streaming”, Sek told IPI.

However, the online space was restricted only months before this month’s poll, when the Cambodian government released new directives focusing on online-based media platforms. Violators of the directives are subject to legal action and closure should they be found guilty of publishing “fake news” that affects national defence, security, social stability or discrimination.

“The context is too broad and subject to different interpretations”, Sek said of the directive.

In June, the National Election Commission also imposed a new set of rules for journalists covering the election. This code of conduct forbids journalists from asking detailed questions about the result of the election or from using their “own ideas to make conclusions”.

To continue operating in this challenging media environment, Voice of Democracy has encouraged its journalists to continue to seek information from different credible sources, including government ones. CCIM has also organized trainings for journalists on personal security measures, including as relates to cyber security. 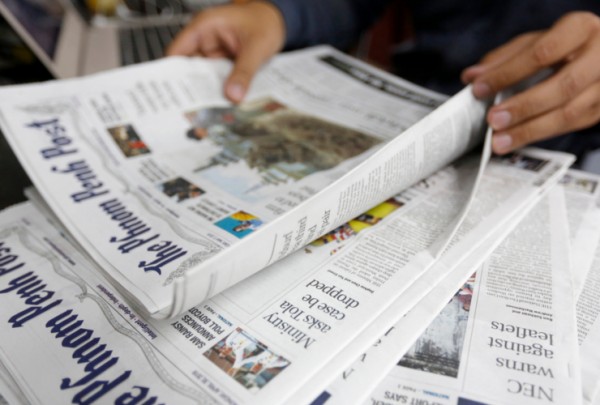 The deterioration of press freedom in Cambodia has been fast. In 2015, the vast majority of Cambodian media professionals consulted in a survey conducted by CCIM said that the country’s media sector was headed in the right direction. A similar survey in 2017 found the opposite sentiment: journalists working both in independent outlets as well as in government-controlled media overwhelmingly saw press freedom as being in decline.

Journalists reported that government influence and control was the biggest challenge to their work.

“When we go out to cover stories, we are blocked by authorities”, one journalist said anonymously in the survey. “They threaten us.”

“For any media that’s not pro-government, it’s difficult to access some places to get information, and you are being observed”, another reported.

IPI contacted several journalists in Cambodia for this story, all of whom declined to speak on the record about the press freedom situation in their country.

Ahead of the upcoming election, stifling the independent media is only one of several measures that Prime Minister Hun Sen and the CPP have taken to secure their victory.

The CPP has ruled the Southeast Asian nation since the collapse of the Khmer Rouge regime 1979, with Hun Sen serving as prime minister since 1985. However, the result of the previous general election indicated that CPP’s almost 40-year rule might be in danger. The CPP won the election with 48.8 percent of the vote but its most prominent rival, the opposition Cambodia National Rescue Party (CNRP), came close with 44.5 percent. The CNRP performed well in the communal election in 2017, too.

Last November, the CPP managed to wipe out its rival when the CNRP was dissolved by the Cambodian Supreme Court, which is said to be firmly in the government’s control. CNRP members were also banned from any political activities for the next five years.

The European Union and the United States suspended their financial support for the 2018 general election after the dissolution of the CNPR, warning that the vote would not be accepted as legitimate and threatening the country with sanctions. Nevertheless, China and Japan have continued to provide electoral assistance to Cambodia.

The remaining opposition parties are not likely to be able to challenge the CPP in the upcoming election. They have had limited possibilities to run campaigns in the media, with the government now in control of most media outlets.